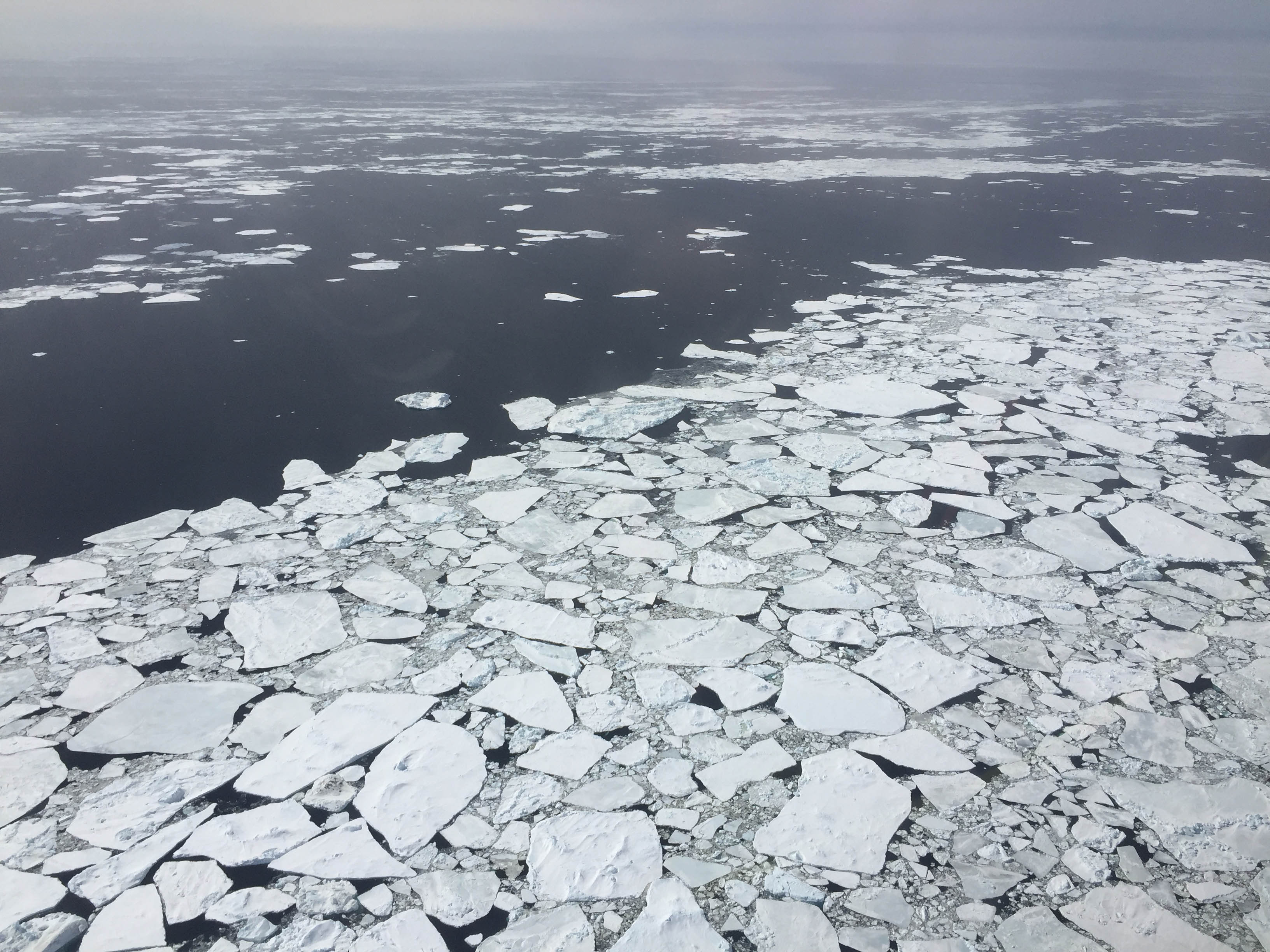 NASA/Nathan Kurz A collection of small broken ice floes in the Antarctic on Oct. 27, 2016.

A study led by Ohio University researchers shows that the increase of sea ice surrounding Antarctica since 1979 is a unique feature of Antarctic climate since 1905 — an observation that paints a dramatic first-ever picture for weather and climate implications on the world’s southernmost continent.

Dr. Ryan Fogt’s study, published today in Nature Climate Change, is the first to detail sea ice extent surrounding the entire continent though all four seasons over the last century. Weather, especially winds and temperatures, contribute to sea ice changes. Fogt is professor of Geography in OHIO’s College of Arts and Sciences.

Previous historical estimates of Antarctic sea ice before satellite measurements began around 1979 were obtained mostly through the lens of a small number of weather stations across the vast continent, human observation along the ice edges, and ice core and ocean sediment samples. However, these estimates all have limitations – most were only observing sea ice conditions in a small area or at a specific time of the year.

But the OHIO study extends the reliable measurements from satellite imagery since 1979 back through the 20th century using historical weather data at places away from the Antarctic continent. At the heart of Fogt’s statistical reconstruction model is the strong connection Antarctic sea ice shares with regional and large-scale climate variability, captured through a network of 30 long-term temperature and pressure observations across the Southern Hemisphere. This new study has nearly tripled the length of observed data about the entire continent, instead of just a specific region, and provides a year-round look, rather than an annual average.

From the new data, the most impressive feature is what Fogt calls a regime shift. “The short period provided from satellite measurements of Antarctic sea ice is really unique. It's the only period since the beginning of the 20th century where we see increases in total sea ice in all seasons,” Fogt said. “We have a statistically significant positive trend over that satellite period. Perhaps even more impressively, these increases since 1979 are juxtaposed by long-term decreases in Antarctic sea ice throughout the early and middle 20th century.” Ice core records similarly confirm regional aspects of the decrease in much of the 20th century.

The satellite measurements start in 1979 at a time when sea ice had been decreasing throughout the first half of the 20th century. Fogt is very interested in the recent increases in sea ice and an anomaly in 2016 and 2017 when the sea ice suddenly decreased, only to rebound again by mid-2020. Sea ice conditions in early 2022 are once again below average around Antarctica.

Unlike the portions of the West Antarctic Ice Sheet that are receding, Fogt explains that the Antarctic sea ice is ice that is floating on the ocean, and it melts and reforms as the seasons change. Since it floats on the ocean, this melting and refreezing doesn’t affect the sea level.

“2016 was a year that surprised all of us, really, because up until then the ice around Antarctica had been increasing, even if slowly,” Fogt said. “And then 2016 came along and, boom, it suddenly dropped down, and it was this big loss that we had never seen in the observation record, and it stayed below average all the way up until mid-2020. And then it kind of went back to normal, but only for a short time.”

Fogt said that understanding what happened over the past 40 years in context of the last century — and how 2016 was different — is a next step for climate researchers. The data repository from Fogt’s study is available to other researchers at figshare (https://figshare.com/collections/Antarctic_Sea_Ice_Reconstructions/5709767).

“These new Antarctic sea ice extent reconstructions continue to show there are changes going on in our climate system that we hadn't previously observed in the context of almost 150 years. The causes of these changes – the decline in the 20th century, the increase after 1979, and the rapid decline in 2016 – are all yet to be precisely determined. But what we're seeing is something pretty dramatic going on recently,” he said. “Our new data set has a lot of potential to really expand our understanding of what causes the Antarctic sea ice to change over much longer timescales. And that's the work that we and the scientific community will have to start doing now.”

Fogt conducted fieldwork in Antarctica early in his career and said he knew in graduate school that he wanted to spend his life researching the continent. And he does love penguins.

“I mentioned there's no impact on sea level rise with sea ice. Why then are we concerned about sea ice around Antarctica? Well, for one, it affects ecosystems. Penguins and seals in Antarctica are like the polar bears in the Arctic. They are critically dependent on how much sea ice there is. The ocean circulation, including the formation of dense water that can sink to the ocean floor, is also related to sea ice variations. Changes in the ocean around Antarctica can have global implications,” Fogt said.

Fogt’s paper, “A Regime Shift in Seasonal Total Antarctic Sea Ice Extent in the 20th Century,” was co-authored by Ohio University alumna Amanda Sleinkofer, who earned an M.S. in Geography from the College of Arts and Sciences in 2021 and worked on the project for her thesis. Additional co-authors are Marilyn Raphael and Mark Handcock from the University of California–Los Angeles. The project is a collaborative effort between Ohio University and UCLA funded by the National Science Foundation Office of Polar Programs.