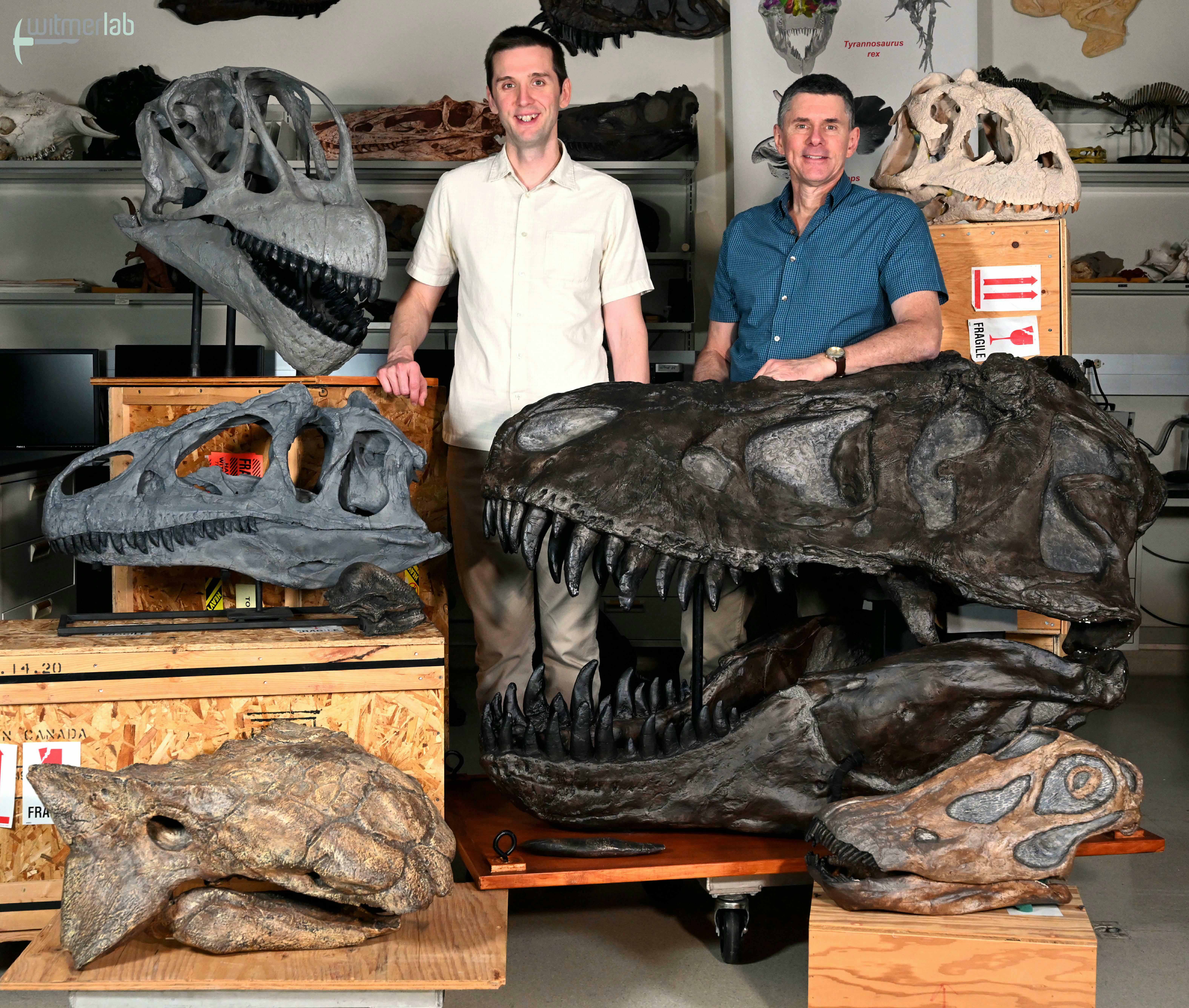 WitmerLab Ruger Porter, left, and Lawrence Witmer surrounded by the skulls of dinosaurs involved in their latest research.

Different dinosaur groups independently evolved gigantic body sizes, but they all faced the same problems of overheating and damaging their brains. Researchers from Ohio University’s Heritage College of Osteopathic Medicine show in a new article in the Anatomical Record that different giant dinosaurs solved the problem in different ways, evolving different cooling systems in different parts of the head.

“The brain and sense organs like the eye are very sensitive to temperature,” said Ruger Porter, Assistant Professor of Anatomical Instruction and lead author of the study. “Animals today often have elaborate thermoregulatory strategies to protect these tissues by shuttling hot and cool blood around various networks of blood vessels. We wanted to see if dinosaurs were doing the same things.”

Many of the famous gigantic dinosaurs — such as the long-necked sauropods or armored ankylosaurs— actually evolved those big bodies independently from smaller-bodied ancestors. “Small dinosaurs could have just run into the shade to cool off,” said study co-author Professor Lawrence Witmer, “but for those giant dinosaurs, the potential for overheating was literally inescapable. They must have had special mechanisms to control brain temperature, but what were they?”

The answer turned out to be based in physics, but still part of our everyday experience. “One of the best ways to cool things down is with evaporation,” Porter said. “The air-conditioning units in buildings and cars use evaporation, and it’s the evaporative cooling of sweat that keeps us comfortable in summer. To cool the brain, we looked to the anatomical places where there’s moisture to allow evaporative cooling, such as the eyes and especially the nasal cavity and mouth.”

To test that idea, the team looked to the modern-day relatives of dinosaurs — birds and reptiles — where studies indeed showed that evaporation of moisture in the nose, mouth, and eyes cooled the blood on its way to the brain.

Porter and Witmer obtained carcasses of birds and reptiles that had died of natural causes from zoos and wildlife rehabilitation facilities. Using a technique developed in Witmer’s lab that allows arteries and veins to show up in CT scans, they were able to trace blood flow from the sites of evaporative cooling to the brain. They also precisely measured the bony canals and grooves that conveyed the blood vessels.

“The handy thing about blood vessels is that they basically write their presence into the bones,” Porter said. “The bony canals and grooves that we see in modern-day birds and reptiles are our link to the dinosaur fossils. We can use this bony evidence to restore the patterns of blood flow in extinct dinosaurs and hopefully get a glimpse into their thermal physiology and how they dealt with heat.”

“The discovery that different dinosaurs cooled their brains in a variety of ways not only provides a window into the everyday life of dinosaurs, it also serves as an exemplar of how the physical constraints imposed by specific environmental conditions have shaped the evolution of this diverse and unique group,” said Sharon Swartz, a program director at the National Science Foundation, which funded the research. “Using a combination of technological innovation and biological expertise, these researchers were able to take a direct reading from the fossil record that provides new clues about how dinosaur skeletal form and function evolved.”

This team of current and former members of WitmerLab at Ohio University has previously looked at other cases of dinosaur physiology. In 2014 and 2018, former doctoral student Jason Bourke led projects involving Porter and Witmer on breathing and heat exchange in pachycephalosaurs (http://bit.ly/2JI6RLn) and ankylosaurs (http://bit.ly/2EwOzMO), respectively. Most recently, former lab doctoral student Casey Holliday led a project with Porter and Witmer (http://bit.ly/2kzvKjP) that explored blood vessels on the skull roof of T. rex and other dinosaurs that also might have had a thermoregulatory function.

The new study by Porter and Witmer is a more expansive, quantitative study that shows that “one size didn’t fit all” with regard to how large-bodied dinosaurs kept their brains cool. That is, they had different thermoregulatory strategies. The researchers looked at bony canal sizes in the dinosaurs to assess the relative importance of the different sites of evaporative cooling based on how much blood was flowing through them.

A key factor turned out to be body size. Smaller dinosaurs such as the goat-sized pachycephalosaur Stegoceras had a very balanced vascular pattern with no single cooling region being particularly emphasized. “That makes physiological sense because smaller dinosaurs have less of a problem with overheating,” Porter said. “But giants like sauropods and ankylosaurs increased blood flow to particular cooling regions of the head far beyond what was necessary to simply nourish the tissues.” This unbalanced vascular pattern allowed the thermal strategies of large dinosaurs to be more focused, emphasizing one or more cooling regions.

But although sauropods like Diplodocus and Camarasaurus and ankylosaurs like Euoplocephalus all had unbalanced vascular patterns emphasizing certain cooling regions, they still differed. Sauropods emphasized both the nasal cavity and mouth as cooling regions whereas ankylosaurs only emphasized the nose. “It’s possible that sauropods were so large — often weighing dozens of tons — that they needed to recruit the mouth as a cooling region in times of heat stress,” Porter said. “Panting sauropods may have been a common sight!”

One problem that the researchers encountered was that many of the theropod dinosaurs — such as the 10-ton T. rex — were also gigantic, but the quantitative analysis showed that they had a balanced vascular pattern, like the small-bodied dinosaurs.

“This finding had us scratching our heads until we noticed the obvious difference—theropods like Majungasaurus and T. rex had a huge air sinus in their snouts,” Witmer said. Looking closer, the researchers discovered bony evidence that this antorbital air sinus was richly supplied with blood vessels. Witmer had previously shown that air circulated through the antorbital air sinus like a bellows pump every time the animal opened and closed its mouth. “Boom! An actively ventilated, highly

vascular sinus meant that we had another potential cooling region. Theropod dinosaurs solved the same problem…but in a different way,” concluded Witmer.

The researchers are now expanding the project to include other dinosaur groups such as duck-billed hadrosaurs and horned ceratopsians like Triceratops to explore how thermoregulatory strategies varied among other dinosaurs and how these strategies may have influenced their behavior and even their preferred habitats.

The research was funded by National Science Foundation (NSF) grants to Witmer (part of the Visible Interactive Dinosaur Project), as well as by the Ohio University Heritage College of Osteopathic Medicine.