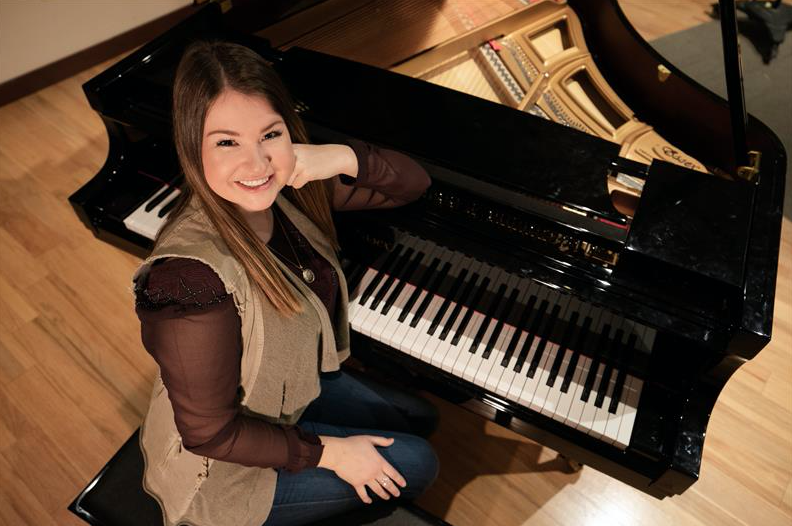 Lexi Murray, a junior majoring in music production and strategic communication, swiped her ID card to the RTV sound room. The room has glass panels, dim lighting, hardwood floors and cushions around the walls to absorb sound. It is filled with musical instruments and evidence of more: a drum kit, microphones, and—in the center of the space—a black, gleaming baby grand piano.

“People are already getting their fingerprints on it,” Murray said, lifting the cover and playing a few notes.

Murray is a student ambassador in the Scripps College of Communication and an active member of the student organization Women in the Music Industry. She is also the reason the new piano is in the studio.

She was enrolled in a music production technology course during the spring semester of her sophomore year, and her professor, Jeff Redefer, assigned the class an acoustic project.

“I asked where the piano is in Schoonover because I wanted to use it for my project,” Murray said. “Jeff said that we don’t have one and if you want to use one, try Glidden. I thought it was ridiculous that we didn’t have an instrument that most music production majors know and want to use.”

Murray suggested requesting that the college obtain a piano for the studio and Redefer encouraged her to take on the project.

Murray scheduled a meeting with Dean Scott Titsworth, whom she knows from her role as an ambassador. She said she considers the dean to be receptive and supportive of students, but just in case, she wrote out 10 arguments against the piano and prepared rebuttals for each.

After a pep talk phone call from her dad, Murray headed to the dean’s office.

She only made it to her third argument (about the college’s legacy of professional preparation) before Titsworth stopped her. She’d made a good point—three, to be exact.

Titsworth said he would contact Redefer to discuss details.

“Lexi is a great leader in our college,” Titsworth said. “Advocating for something she’s passionate about took resolve and focus. And to put it simply, she was right: our students needed a piano.”

Murray said she was dumbfounded that the dean had gotten on board so quickly. She was also nervous; it was now out of her hands. She could only trust that Titsworth would follow through and contact the right people.

“We’re so fortunate as Scripps students to have such an open-minded and genuine man as our dean,” Murray said. “He really cares about us and wants us to have as many resources as possible to do what we want to do with our time at Ohio University.”

In collaboration with Redefer and the College of Fine Arts, Titsworth confirmed a need for the instrument. Using funds from the $15 million Scripps Howard Foundation gift, the college purchased a baby grand piano, which was moved into the studio over the summer. Music production students can now use it to pursue their dreams.

“Since I’ve been back on campus, I’ve gone into the studio a few times to play the piano and, wow, is she beautiful,” Murray said. “I’m in the process of getting my original music recorded, and my main songwriting instrument is the piano, so I will definitely be utilizing the studio often to get that done.”