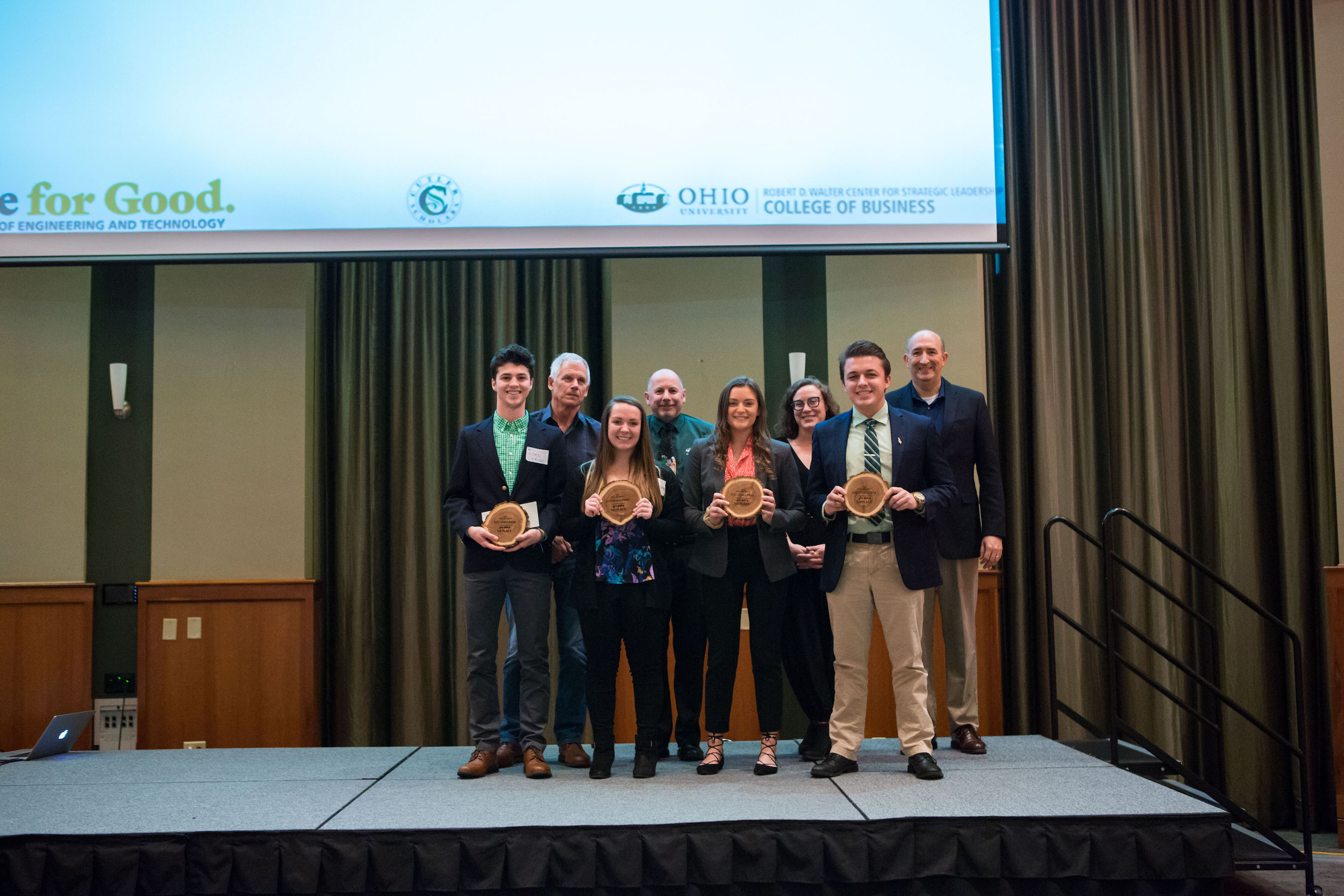 Ohio University plans to replace two of its gas-operated utility task vehicles (UTVs) with battery-operated models, thanks to a proposal made by this year’s winning Eco Challenge team.

The Eco Challenge competition launched in 2016 by Loehr Professor of Mechanical Engineering David Bayless and Dan Squiller, an Ohio University electrical engineering alumnus who is now CEO of Aquam Corp. in San Diego. Eight interdisciplinary teams of four students from the Russ College of Engineering and Technology, College of Business, Honors Tutorial College, and the Cutler Scholars program create entries that advanced Ohio University’s sustainability mission. The ideas must be both viable and economically sound.

“We asked them to identify and solve some sustainability-related problem in the campus community or the surrounding area,” Bayless said. “It’s been a very interesting experience for them. They’ve got to be able to work with marketing, with communications, with accounting.”

“The University has aggressive goals on sustainability,” Squiller added. “Wouldn’t be a cool idea if we could combine advancing the University’s sustainability ideas with getting some real-world experience for our engineering students?”

This year’s winning team, Russ College students Aidan Crowl and Caleb Saunders and Scripps College of Communication students Ally Meyer and Haley Witherell proposed replacing the UTVs with battery-operated models. The UTVs are used by grounds maintenance crews to get around campus to perform their duties.

While they are more expensive up front, the operational savings would recover that in 1.8 years, and realize an estimated savings of $8,600 over five years while potentially reducing carbon dioxide emissions by 4.9 tons per vehicle annually.

“As a mechanical engineer, the current UTVs we use drive me crazy,” Bayless said. “They’re terribly inefficient. With a battery-powered system for an electric motor, they can produce the torque that is needed, and they’ll save a tremendous amount of energy and fuel cost.”

The Eco Challenge has resulted in several projects that are being implemented: to-go containers in cafeterias, converting Convocation Center lights to LEDs, and other projects. Bayless credited Chief Facilities Officer Steve Wood with getting the projects implemented.

The UTV proposal will likely become reality after the end of the current fiscal year.

Director of Sustainability Elaine Goetz said the battery-operated vehicles will provide a variety of benefits.

“They’re quieter and they don’t emit air pollutants, so are better for the grounds workers’ health,” she said, adding that the University has already worked to purchase electric lawn equipment.

Squiller said an important part of Eco Challenge is getting students from different backgrounds working together and combining their skills, as it’s a goal of the Russ College of Engineering and Technology to provide business and communications training. Meanwhile, students in those majors aren’t often exposed to engineering concepts. The criteria for judging the proposals include the validity of claimed benefits, implementation risk, return on investment analysis, addressing stakeholder concerns, and the clarity of the final presentation. Bayless and College of Business Professor Andrew Pueschel mentor the teams competing.

“We thought that real-world experience would be something unique in the university environment,” Squiller said, adding that the entries get stronger every year. Squiller serves as one of the judges for the challenge.

“As a seasoned CEO having evaluated and decided the fate of billion-dollar investment proposals, I have to tell you I was beyond impressed with what these undergraduate students produced. It was one of my proudest moments as an alum.”

Squiller said he hopes to expand the challenges to other colleges in the future.

“Our objective is to make the program more valuable and better every year.”