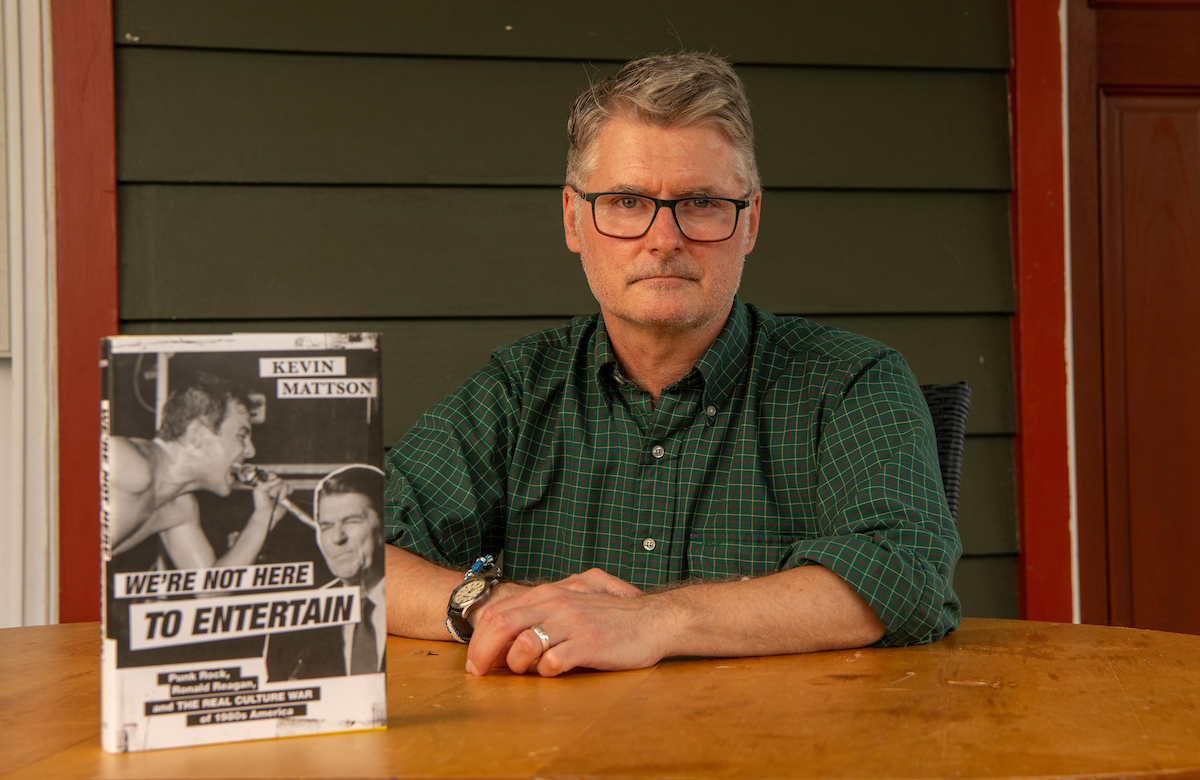 The 1980s may have been 40 years ago, but there is no denying that besides big-hair bands and leg warmers, the decade is still defined by Ronald Reagan, the “MTV generation” and a culture of conservatism and corporate consumerism.

In Ohio University professor of history Kevin Mattson’s new book “WE’RE NOT HERE TO ENTERTAIN: Punk Rock, Ronald Reagan and the Real Culture War of 1980s America,” Mattson documents how the punk rock movement produced ideas and modes of expression that defied the basic assumptions of the time, and reminds readers of punk’s lasting cultural and political importance.

“I remember being involved in the D.C. punk scene in the 1980s and how there was a very negative view of it, especially in mass culture,” Mattson said. “There were television shows and movies that depicted so-called punks as violent and destructive, certainly nothing that should be taken seriously and treated critically. I wanted to write a book that saw something of the positive side of punk, a movement made up of rebels who had ideas and could think critically about the ‘entertainment’ pumped at them.”

“WE’RE NOT HERE TO ENTERTAIN” explores how punk culture emerged alongside a growing political awareness and spread far beyond urban centers like New York City and Los Angeles, surfacing in places like Kansas, Oregon, Michigan, Oklahoma, and Ohio. It also explains how punk raged against the bloated entertainment industry, unleashing a culture war aimed at the Reagan presidency, corporate record labels, FM radio and eventually MTV.

Throughout the book, Mattson puts the movement into a wider context, locating it in a culture war that pitted a blossoming punk scene against Reagan. He highlights how the punk culture rebelled against Reagan’s talk of end days and nuclear warfare and seethed at his tax cuts for the rich and slashing of school lunch budgets. Mattson goes on to explain how Reagan’s previous career in Hollywood, his zeal for blockbuster movies and musicians, and his “entertainer in chief” persona stood in stark contrast to punk’s loathing of corporate culture — whether it was corporations marketing entertainment or those making weapons of mass destruction.

“When people read about Reagan’s ‘entertainer in chief’ persona, I think a lot of people will see comparisons with Donald Trump and how he, in his own way, channels Reagan’s entertainment version of governing,” Mattson added. “Few people also know that Reagan’s slogan in 1980 was ‘Let’s make America great again.’ So not only can people learn about how punk rebelled against Reagan but can draw their own conclusions about the frustrations the younger generation has with the current government.”

Mattson took both his “historical perspective” from participating in the punk scene 40 years ago and extensive research in historical archives to compile an in-depth look into the heated debates that punk’s opposition generated. He visited numerous archival holdings, analyzing and researching zines, art and posters, as well as went through newspapers, alternative magazines and microfilm.

Even Krist Novoselic, a founding member of the band Nirvana, reveled at Mattson’s book, saying, “Mattson looks at American punk of the early 1980s through excellent scholarship. His work reveals more than a music scene — which itself produced outstanding bands. He also examines anarchist thought, with roots in the nineteenth century, put into practice by youth creating their own way of life. This is a guidebook to a future for people who want it.”

The book also covers topics like Reagan’s run against Jimmy Carter, arguing against the reinstatement of the draft; the rise of cyberpunk in the writings of John Shirley and William Gibson; punk musicians and other artists; the touring networks where bands would sleep at a fan’s house and do “DIY” to the extreme; the search for personal ethics in things like “straightedge;” the intelligence of punk poetry that can be seen in song lyrics; movies by and for punks such as “Repo Man;” the importance of the cassette tape; the growth of an anti-nuclear arms race movement; the clash of the Gen X and boomer generation; the rise of squatting; how alternative rock arose in the mid-1980s, not the 1990s; and much more.

“People often don’t understand how expansive the movement was – even bigger than the hippie movement – all while it’s being portrayed negatively,” Mattson said. “There was a great deal of creativity that crossed mediums – music, art, literature, political protest. I think anyone who grew up during the 1980s or are nostalgic about them will find this book a fun read while taking more from it than just entertainment."

The book was published through Oxford University Press.