Alumna named a Washingtonian of the Year for work to help women, children rebuild their lives 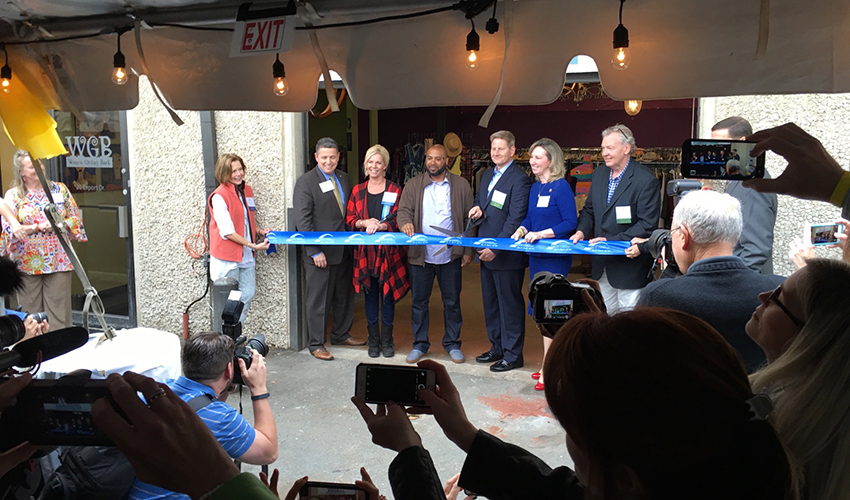 For the past nearly 50 years, Washingtonian magazine has celebrated its annual Washingtonians of the Year, lifting up a select few individuals who make the nation’s capital and areas around it better, stronger communities. Among this year’s recipients? The mayor of the District of Columbia, the director of the National Institutes of Health’s Vaccine Research Center, and Ohio University alumna Terri Morris Stagi, BSJ ’77.

Stagi, along with Leslie Strittmatter, are among 12 individuals named to the 2020 Washingtonians of the Year list in recognition of the nonprofit they founded more than 13 years ago. Women Giving Back helps women and children in crisis to rebuild their lives.

2020 was an incredibly challenging year, and Women Giving Back was able to not only continue its mission to distribute clothing at no cost to their clients, but to pivot overnight during lockdown and provide a drive-through food bank.

“We certainly did not see this honor coming; it’s very humbling,” Stagi said.

In 2007, Stagi and Strittmatter established Women Giving Back, setting out on a mission to distribute free clothing—one of life’s most basic necessities—to women and children taking their first steps on a path to secure housing, gainful employment, financial stability and independence.

Stagi came up with the idea while serving on the board of HomeAid Northern Virginia where she handled all the advertising and marketing needs of the nonprofit. Stagi owns and runs a full-service advertising agency that specializes in the building industry. The board was made up of national and regional builders helping to renovate or build housing facilities dedicated to alleviating homelessness.

HomeAid tasked Stagi to find a way to get women involved in the nonprofit’s work. While meeting with case managers of various shelters, she discovered a significant need to be filled.

“Because so many homeless women and children are victims of domestic violence, they often have to leave their homes in the middle of the night with just the clothes on their backs,” Stagi explained. “So, they really needed clothes.”

She put a call out to women in the building industry for clothing, and the overwhelming response quickly gave birth to Women Giving Back and a community of volunteers and partners devoted to meeting—and exceeding—its mission. What started out as little more than a closet rapidly outgrew that space and then two more larger spaces, both donated by one of Stagi’s advertising clients.

Today, Women Giving Back operates out of a 11,000-square-foot facility in Sterling, Virginia, where a boutique-like store provides women and children donated clothing, accessories, shoes and so much more. The women who visit Women Giving Back are referred to the nonprofit by its more than 200 referral agency partners, including shelters, housing programs, government agencies, domestic violence and human trafficking programs, schools, medical facilities, job training programs and faith-based organizations. There is no cost for any of Women Giving Back’s services, which include childcare while the women shop. Those services have expanded over the years to include bags-to-go for women who can’t get to the store, a snack pack program for children, a back-to-school supplies program, a Halloween costume program and a prom dress program to support homeless or low-income students.

“We never would have made it without people from all walks of life,” Stagi said of the more than 5,000 volunteers and many partners who have contributed to their efforts. “We have everything from Girl Scout troops and teenagers to corporations that do community service days or corporate service days, and they come in and work in the facility. It’s just a wonderful thing to see.”

The COVID-19 pandemic forced Women Giving Back to close its store. The nonprofit quickly pivoted, filling clothing needs through its bag-to-go program and converting its space to a no-cost, no-contact, no-questions-asked drive-through food pantry that also provides diapers and other essentials—and that saw two-mile-long lines of cars on distribution days.

“We only have a staff of four, and the fact that they were able to pull it together with the help of many individuals – it was truly a remarkable thing to see,” Stagi said.

In addition to cofounding Women Giving Back, spearheading its operations and serving on its executive board, Stagi is the owner and president of her own advertising agency, The Stagi Group, and started a new business, Ms. Fixit, an employee-based company offering home maintenance services. Stagi traces her career and community service—and some of the most important things in her life—back to Ohio University.

It’s where she met her husband and where both of her children earned their college degrees. It’s also where her involvement in sorority life led to her serving as president of Pi Beta Phi as well as the Women’s Panhellenic Association, the governing body for OHIO’s 10 National Panhellenic Conference sororities. In that role, she worked with the University’s administration to revamp the rush system at OHIO, among other achievements.

“I never knew that I had any kind of leadership capabilities,” Stagi said. “It totally changed the trajectory of my life, and I don’t think I ever would have had the confidence to know I can take on anything I want if I hadn’t gone through that at OU.”

That confidence, that road to success—that’s what Women Giving Back is all about.

“The work that we do is very hands-on, so you get to see the results of what you’re doing,” Stagi said. “You see the people leave with goods that are actually going to change their lives.”

And, for Stagi, their work has only just begun. Fundraising will soon begin for the 20,000-square-foot space that is needed and that will provide a permanent home for Women Giving Back, and Stagi has her sights set on opening a similar store that helps men in need on their paths to building their futures.