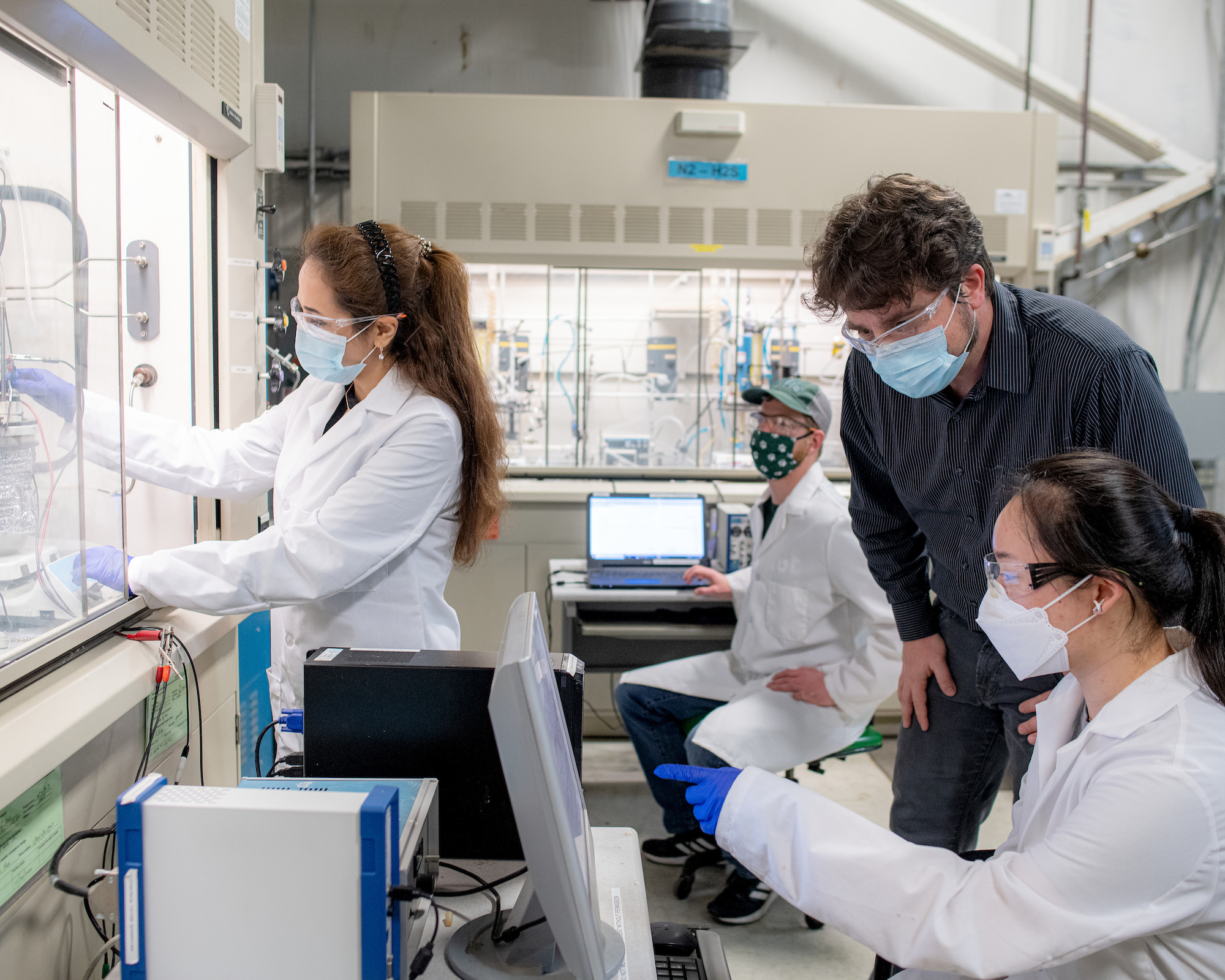 Rich-Joseph Facun/Ohio University OHIO students and associate professor Marc Singer (second from right) work in the Institute for Corrosion and Multiphase Technology in March 2021. The facility is able to stimulate a variety of complex corrosion environments for study.

Not many people think of corrosion every day. However, the professors and students researching at Ohio University’s Institute for Corrosion and Multiphase Technology (ICMT) work continuously to find new ways to mitigate issues caused by corrosion.

The ICMT, out of Russ College of Engineering and Technology, has been awarded the National Association of Corrosion Engineers (NACE) International 2021 Distinguished Organization Award by the Association for Materials Protection and Performance (AMPP) recognizing outstanding contributions in the field of corrosion science or engineering over a sustained period of time.

“NACE recognizes that we have a trend of turning out excellent graduates year after year, and that there is longevity and stability in what we do. I’m very proud of that,” said Srdjan Nesic, professor and director of the ICMT.

“The Association Awards are an opportunity to celebrate those individuals who have made significant contributions to our industry, whether it be in corrosion science, engineering, education, or extraordinary service to the association,” said Tim Bieri, Chair of AMPP. “It is an honor to recognize the extraordinary efforts and achievements of our members like Ohio University who have done so much to advance the association and the industry.”

The ICMT has received numerous NACE awards in the past. AMPP was created recently after NACE International and The Society for Protective Coatings united with more than 145 years of combined expertise. NACE International was the world’s largest professional society dedicated to corrosion prevention.

Nesic also received the prestigious Willis Rodney Whitney Award in 2018, which recognizes significant contributions to the corrosion science. Nesic has been the director of the ICMT since 2002 and continues to lead the institute into new discoveries.

ICMT was established in 1993 as a National Science Foundation Industry-University Cooperative Research Center (IUCRC), and aims to better understand and combat corrosion in multiphase systems, like oil and gas. Corrosion is often defined as a metal breaking down due to a chemical reaction with the environment.

Nesic compares corrosion to corruption – when left unchecked, it can lead to rapid deterioration of an infrastructure. Well known real-life examples Nesic and Singer point to are the collapse of bridges, leaks and explosions of underground pipelines and rusting of car parts. Graduate students and researchers find ways to help combat against corrosion for many industrial clients.

“Corrosion is everywhere,” Singer said. “It is the tendency of every metallic structure around us to return to its ore mineral state, which is often not good news since it also comes with a degradation of its mechanical properties. You need to make sure those are maintained so that they continue to work as intended.”

Led by Nesic, the ICMT operates six large project teams comprised of graduate students, undergraduate students, faculty, postdoctoral researchers, lab engineers and technicians. Almost all key research activities at the ICMT are performed by students, who are supported by the ICMT team. The hands-on experience is super important for them, Nesic said.

“The projects and challenges the students work on come straight from the industry, and then the students meet with their sponsors to get direct feedback,” Nesic said. “[ICMT] is a football field-sized lab with a lot of equipment and they get to do things that very few other students can do in their laboratories because we have the equipment which enables us to simulate the real-life problems that companies have.”

While conducting research for companies, students fulfill the academic requirements for their masters and doctoral degrees and leave OHIO with a better understanding of how their work can impact the industry.

“This experience prepares students very well for the next step because they have learned from working with us how to apply the right set of tools and knowledge,” Singer said.

Student and research success from ICMT continues to grow, with new achievements occurring constantly for the institute. Previous accolades just from NACE International include:

These awards are only some of the abundant accolades the ICMT’s students have received. The institute’s students have also received countless local, national and international recognitions and scholarships as well.

“We are fortunate to have a very high rate of job placement right in the industry for our students, with some into prestigious and national labs,” Singer said. The pride that he and Nesic have for their students, past and current, is obvious when discussing the students’ successes.

Singer knows what it is like to be on the student and professor end for ICMT. He came to the institute in 2002, and went on to adopt leadership roles and to complete his Ph.D. while working in research at the ICMT. He joined the faculty of the Department of Chemical and Biomolecular Engineering in 2013. He has now led various students and research fellows into new roles, continuing the important work in the corrosion field.

“Working at [ICMT] helped me to grow and gain confidence in leading research projects and also how to approach a problem and resolve it. I liked the multicultural and friendly environment. I considered the institute like family,” said Zineb Belarbi, who worked as a postdoctoral research associate and research project leader from 2014 to 2020. She is now a materials scientist at Battelle supporting the National Energy Technology Laboratory.

Corrosion will not magically disappear one day, even if oil and gas production decreases. Work will continue in creating prevention measures that can help mitigate the disastrous effects that can come from it.

“ICMT is now almost 30 years old and it continues to run extremely strong. Actually, in my view, it’s never been better and the future is bright with Marc and all the other young competent people in place,” Nesic said.

While the oil and gas industry is not disappearing tomorrow, Singer and Nesic said that the ICMT is already thinking of the future.

“Oil and gas will remain here for at least the next 10-20 years, but we need to also look at other industries,” Singer said. “Embracing this change and being ready to address the new challenges coming up is not impossible at all. We have the expertise, the knowledge and the equipment to position ourselves very well.”