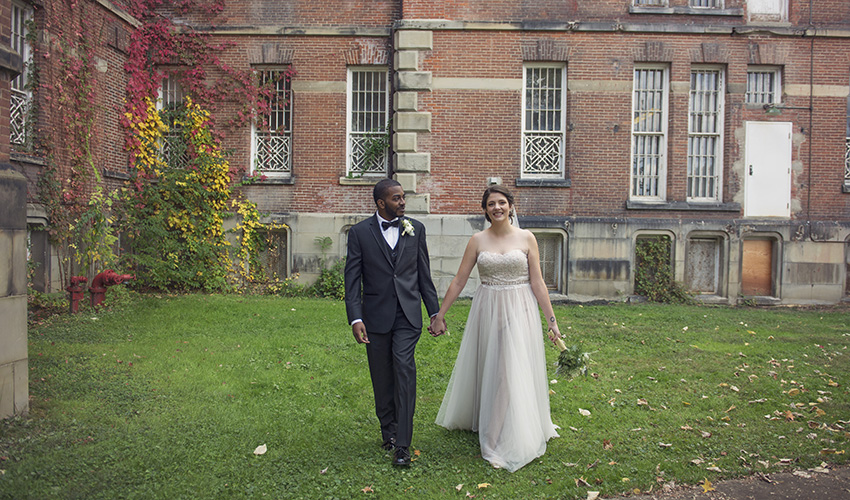 Kasey Daniel, BA ’12, MED ’14, and Russell Morrow, BSC ’12, MED ’14, saw many of their lives’ milestones occur at Ohio University. It’s where they discovered their future career paths and each other, and it’s where they returned in October 2016 to get married in the place where their love story began.

No two Ohio University student experiences are the same, but the shared moments and paths crossed shape futures in unexpected ways. For Kasey Daniel, BA ’12, MED ’14, and Russell Morrow, BSC ’12, MED ’14, it was a shared leadership experience and serving their fellow students where they found love—both personally and professionally.

The two met in the summer of 2011 while serving as leaders for Bobcat Student Orientation (BSO), a month-long program that brings incoming first-year students to the Athens Campus to prepare them for their transition to OHIO.

Each year, about 45 undergraduates are selected to serve as BSO leaders who welcome and guide OHIO’s newest Bobcats and their families through the orientation process and activities.

“For one solid month, these students are with the same 45 people all the time,” explains Jenny Klein, OHIO’s executive director of academic advising and graduation plans, who oversaw BSO for several years and worked with Daniel and Morrow. “They really get to know each other. It’s like a fast-forming best friend scenario.”

Morrow served his first stint as a BSO leader in the summer of 2010 and, as a returning BSO leader in 2011, was assigned first-time leaders to mentor. One of his mentees was Daniel.

Over the course of the summer, the two become close friends with each other and fellow BSO leaders, and by the end of fall quarter, Daniel and Morrow began dating.

“BSO love. That’s what we call it,” Klein says. “Every summer, we had at least one couple. BSO brings together students who likely wouldn’t have met otherwise.”

“Our first taste of careers in higher education were a result of BSO and seeing people, like Jenny Klein, who worked professionally with students,” Daniel says. “BSO kind of illuminates that a little bit. For me, it did.”

Both Daniel and Morrow dedicated much of their student years at OHIO serving and working with students—and gradually shifting their career aspirations toward higher education. Daniel served as a peer mentor for OHIO’s Learning Communities, taught in the program as a graduate student and worked in the Allen Student Advising Center.

“I really enjoyed helping other Bobcats figure out their place or direction,” she says.

As a graduate student, Morrow worked in a program designed to help low-income students and students with disabilities prepare for college, and, as an undergraduate, he volunteered as an OHIO Out-of-State Ambassador.

“That was really cool – just being able to help students find a place on campus, particularly when they come from high schools and places where no one else is from,” he recalls.

They served another summer together as BSO leaders before starting graduate school, remained together throughout their graduate studies and even dated long distance for six months while Daniel was finishing her graduate degree and Morrow was working in California.

The two reunited at the University of California, Davis, where Morrow worked in first-year advising and Daniel was a program coordinator for orientation.

It wasn’t long before Ohio came calling them home. These Bobcat sweethearts returned to Athens in October 2016 to tie the knot in the place where their love story began. Two months later, they moved to Columbus for new positions in higher education.

Today, Morrow is the assistant director of multicultural student affairs at Denison University; Daniel is the director of advising and learning support at Columbus College of Art & Design.

“What I really love about my job is helping students through crisis, and that’s a lot of what I do,” says Daniel. “It’s really hard but really rewarding.”

“It’s kind of an extension of what I learned I really love to do,” he says.

Since the two graduated, they’ve stayed connected to the people who’ve been on this journey with them since day one.

“So much of our social circle are people that we worked with at orientation or we had different experiences with at OU,” says Morrow. “I’m pretty sure that every year for the past few years we’ve been a part of a wedding with someone who we did orientation with.”

“I think OU just has these deep webs,” Daniel adds. “We moved to California, and our supervisor was an OU alum—all the way across the country. Now where I work, there’s a whole little group of OU people. We didn’t go to OU at the same time and meet, and we didn’t know each other or maybe didn’t know much about each other before starting to work together. But I think it makes an instant bond. There’s just an affinity there.”

And they’ve stayed connected to Klein, who was there for their wedding—and even gave a toast—and who, Morrow says, “has been a very important person in our relationship together but also to each of us individually.”

“She was a very constant presence and force in my life for quite a few years,” Daniel says, noting not only the career advice and wisdom Klein offered her but also the example she set as a higher education professional. “She’s incredible.”

Daniel and Morrow had a full-circle moment with Klein last fall, running into her during OHIO’s Homecoming 2021 festivities and introducing her to their son, Quincy, who was born in September 2020.

“When she was meeting Quincy, it was like, wow, you were sort of responsible for him,” Daniel laughs. “If it weren’t for you, he might not exist!”

Like many Ohio University faculty and staff, Klein has often seen love bloom among Bobcats inside and outside of the classroom. Being a part Daniel and Morrow’s story is special.

Share your OHIO love story! Beginning Valentine’s Day, Monday, Feb. 14, and continuing through OHIO’s Founders Day on Friday, Feb. 18, share the experience(s) that made you fall in love with Ohio University, and you’ll be eligible to win a two-night stay and dinner at the Ohio University Inn. Click here for details on “I Love OHIO.”