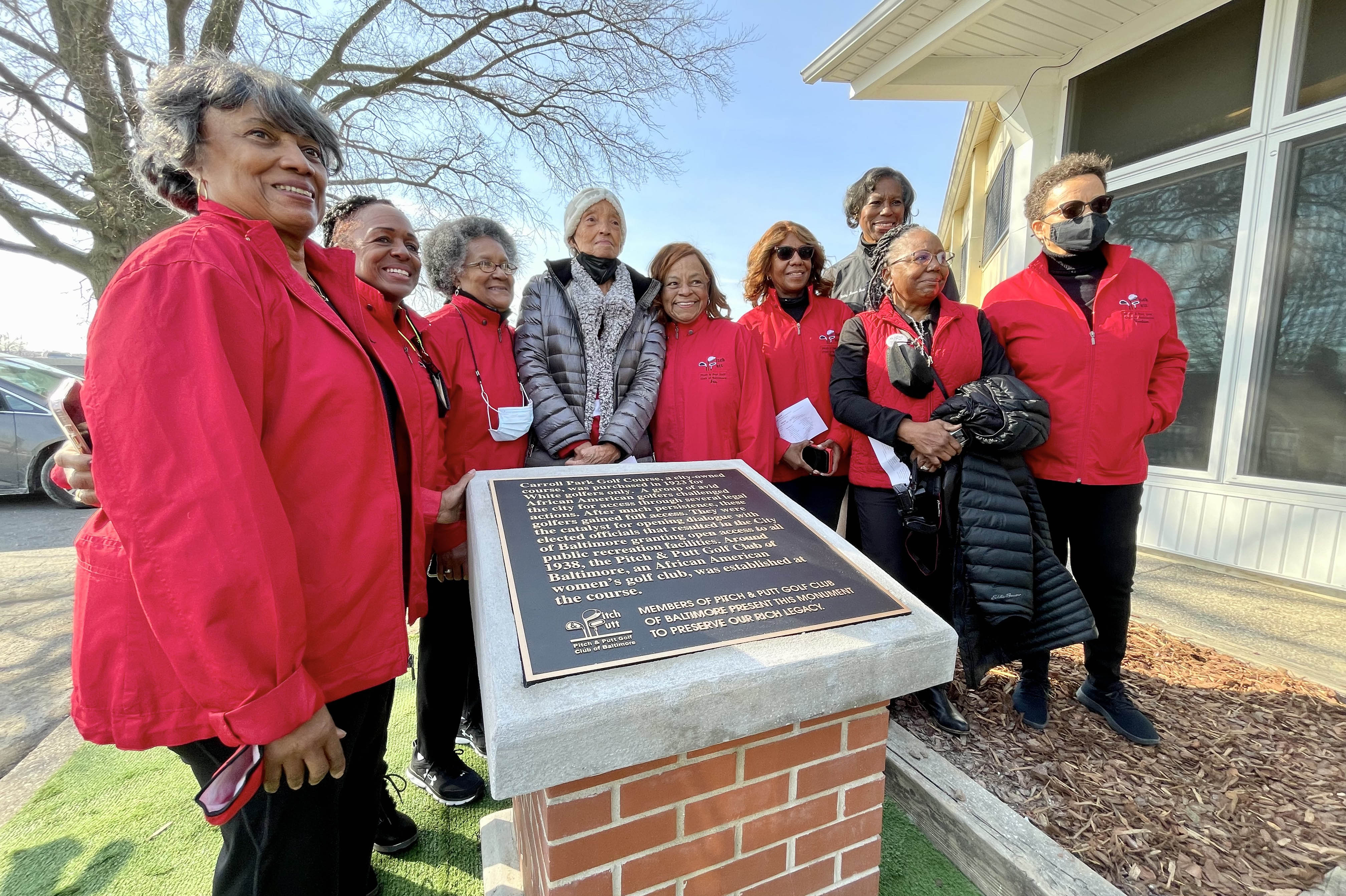 The monument, which was unveiled on Feb. 1, tells the story of a group of Black golfers who litigiously fought for access to play golf at Carroll Park, which helped lay the groundwork for the desegregation of the entire Baltimore parks system.

Though the story of racial desegregation in the United States is often told through broad strokes and digestible bullet points, it was in reality the culmination of small and often contentious fights that paved the way for the Civil Rights Movement. This story that helped lead to the desegregation of Baltimore parks was almost all but forgotten until Ohio University alumnus Jim Wells (MA ‘06) gave it new light in his Geography master’s thesis.

In 2008, the academic journal Geographical Review published “Separate but Equal? Desegregating Baltimore’s Golf Courses,” based on a thesis project by Wells and geography professors Geoff Buckley, Ph.D., and Chris Boone, the latter of whom is now a professor at Arizona State University. The study circulated throughout the academic world, but eventually caught the eye of Brenda Goburn-Smith, a member of Baltimore’s Pitch & Putt Golf Club, the second oldest Black women’s golf club in the country.

The article read like a novel, Goburn-Smith said. “There was even a murder in the park, so it was kind of a page turner.”

She was determined to not let this story fall to the ash heap of history, so using Wells’ research she sought grants and orchestrated charitable golf tournaments to raise $10,000 to erect a monument dedicated to those who fought tirelessly for equal access to golf.

“The monument is a great opportunity to tell this little-known story about Carroll Park,” she said.

The thesis was part of a large National Science Foundation-funded project called the “Baltimore Ecosystem Study,” or BES for short, which Buckley and Boone have worked on since 1999. One of 26 long-term ecological research projects in the U.S., the purpose of the BES is to understand how cities like Baltimore evolve over time and how they function as ecosystems. Buckley and Boone brought Wells onto the project because he wanted to study parks and public lands. Wells, who is now the park manager of Goblin Valley State Park in Utah, sifted through countless documents and seemingly endless pages of minutes from the Baltimore Parks Commission to piece this story together.

“There is this assumption that parks are for everybody,” Wells said. “But they were generally put there for affluent white communities and others had to fight to get access.”

Carroll Park opened in 1923 and included a golf course for whites only. However, following a mass exodus of the city’s white residents in the 1930s, many of the city’s parks and infrastructure were left in rapidly deteriorating condition.

“Unfortunately, like every other aspect of society, these were segregated in the early 20th century,” Wells said.

Wells explains that because this era of civil rights was before the landmark Supreme Court ruling Brown v. the Board of Education, which declared “separate but equal” to be unconstitutional, the method of civil rights activists at the time was not to challenge segregation directly, but to challenge the claim that Black facilities were equal to white facilities. However, making Black-only facilities meet white standards was often so expensive that it was typically more feasible to desegregate them all together.

Still, African Americans were not permitted to golf at any public facility in Baltimore. If they wanted to play golf they would have to drive to Philadelphia or Washington, D.C., Buckley said.

In 1942, members of the Monumental Golf Club, a Black men’s golf club, took their grievances to court. The club declared that they, along with their white counterparts, should be granted the right to golf at Carroll Park. The court sided with them and granted limited access to play at Carroll Park, making it the only golf course in Baltimore at the time to allow African Americans. The nine-hole golf course permitted African Americans to play on Mondays, Wednesdays and Fridays. However, the Monumental Golf Club did not stop there. They continued to challenge the courts until a ruling was handed down 1948 declaring that African Americans were able to golf at all city courses.

“It was an incredible story of resistance and tenacity on the part of African American golfers,” Buckley, professor of geography in the College of Arts and Sciences, said.

Eventually the efforts of the Monumental Golf Club would help pave the way to the integration of public recreation facilities throughout Baltimore.

“It was so unlikely that a group of African American golfers would be a catalyst to open conversation with the city,” Goburn-Smith said.

The monument stands four feet tall with a bronze plaque telling the story of the Monumental Golf Club and its fight to desegregate Carroll Park. Smith hopes the monument will “help tell some of the broader history of America, because it’s really rich.”

“Carroll Park Golf Course, a city-owned course, was purchased in 1923 for White golfers only. A group of avid African American golfers challenged the city for access through several legal actions. After much persistence, these golfers gained full access. They were the catalyst for opening dialogue with elected officials that resulted in the City of Baltimore granting open access to all public recreation facilities. Around 1938, the Pitch & Putt Golf Club of Baltimore, an African American women’s golf club, was established at the course.”

Tags:
Department of Geography
College of Arts and Sciences