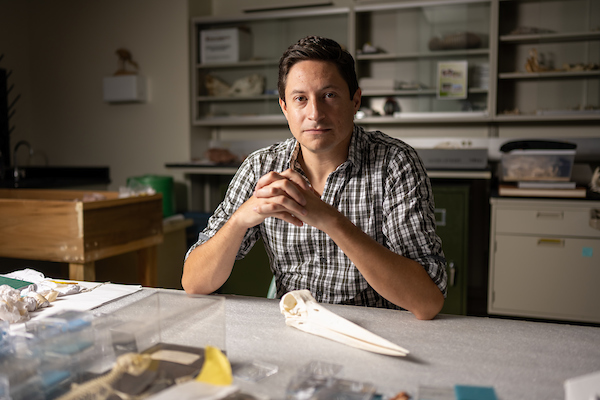 Chris Torres is an avid bird watcher, but rather than searching for them up in the sky, he looks down in the dirt, uncovering bird fossils and looking at the way they have evolved throughout history.

During his three years researching at OHIO, one of which he’s completed, Torres will work with O’Connor on two main projects related to the evolution of birds and their diversification on the planet. The NSF post-doctoral project focuses on how the relationship between animal form and function shifts with large-scale changes in ecology, specifically the evolution of flightlessness in birds, which has occurred independently in many different groups, and the impact on different anatomical systems – from the structure of the brain to the bones making up the wings. Part of the project includes collecting morphological data from the skulls of birds and analyzing that data.

The second project will tackle the description of a new bird fossil collected by their NSF-supported team on the Antarctic Peninsula. According to O’Connor, the fossil is incredibly important as the animal lived just before the earth was struck by an asteroid that triggered a mass extinction event that marked the end of the Mesozoic Era and the rise of birds as the most diverse form of terrestrial vertebrate on the planet.

“What I’ve been doing so far and leading up to researching here at OHIO is reconstructing models of brains for different types of birds with different types of lifestyles,” Torres said. “I look at differences in the brains of birds living today that correspond to differences in their behavior. Then I apply those patterns to the brains of long-extinct birds to infer how they might have behaved when they were still alive.”

Prior to coming to OHIO, Torres received his masters degree from the University of North Carolina Wilmington, where his research focused on studying flamingos, looking at how their beaks and unique body shape impact the way they feed. He received his Ph.D. from the University of Texas in Austin, where he first started reconstructing the shape of birds’ brains to help decipher how birds from millions of years ago would’ve acted and their evolution.

He explained that bird skulls wrap around their brains, making it easier to reconstruct what a bird brain could look like from 70 million years ago. He said by using a CT scan, you can fill in the area where the brain goes and make inferences on how that brain was used and gain insight into the biology of those animals. 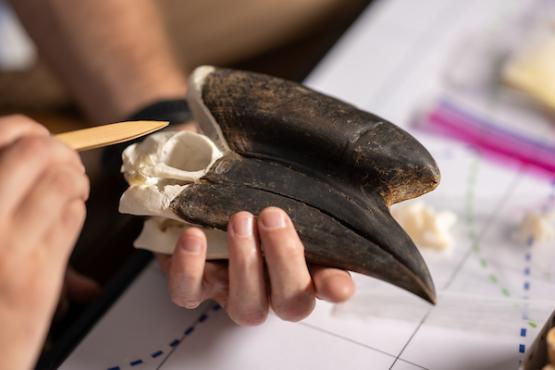 One bird Torres is focusing on is the American Coot, part of the Rallidae family, because the species within this larger group keeps losing flight and are in the process of losing flight.

“We know these birds are undergoing a transition in locomotion and losing the ability to fly, so we’re looking at their brains so we can gain insight to see how this change affects the nervous system,” Torres said. “We can apply what we learn about these birds to the fossil record. Our hope is to better understand the evolutionary histories of other groups that lost flight millions of years ago – like ostriches.”

Although O’Connor’s research traditionally focuses on deeper bird evolution, among early birds and their close dinosaur relatives, and Torres focuses more on younger birds, Torres wanted to find someone who had similar questions to his own and O’Connor was a natural fit. For O’Connor, Torres brings fresh perspective both to the field and to OHIO and its students.

“Chris brings a fantastic skill set related to quantitative biology and avian evolutionary biology, including very good and contemporary perspectives on how best to integrate information derived from modern organisms as part of analyses focused on new data from the fossil record,” O’Connor said. “Having completed a MS thesis that involved molecular systematics and a Ph.D. dissertation firmly rooted in anatomy and paleontology, Chris is a new-school scholar who can seamlessly work between the world of today and the deep history of our planet through the fossil record.”

Students in labs at OHIO also have the opportunity to interact with Torres on various research topics, being trained on the techniques that he and O’Connor use. Torres will also participate in formal discussion groups this spring semester exploring assumptions inherent in different types of biological research.

“With support from the NSF, we are able to bring a dynamic young researcher into the OHIO environment,” O’Connor said. “This is great for everyone from first year undergraduates to the senior level graduate students, not to mention how refreshing it is for faculty.”

Recently, Torres was also featured in several news outlets about a study he led on how birds survived the dinosaur-killing asteroid.