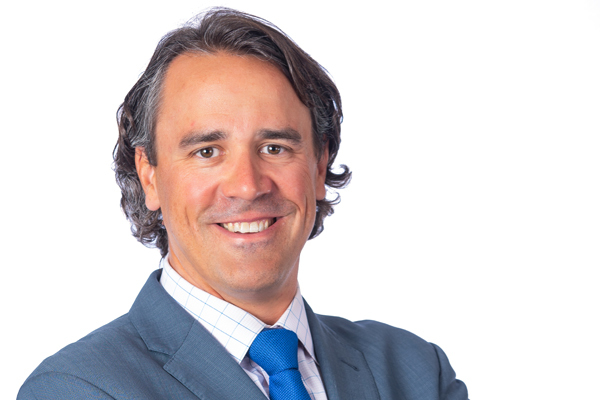 Alumnus Brody Richter said the biggest challenge he faced at Ohio University was having to leave Athens. But he set his sights on one of the best law schools in the country in a new city that he's called home ever since.

"As I’ve told people before, Athens is a bit of a bubble because of its size, location, and culture. Living successfully in Athens is not the same as living successfully outside of Athens. So, I think coming to terms in that last year that it was coming to an end, realizing that there are more challenges and less safety nets waiting outside of Athens, and then actually going and facing those challenges, was probably the hardest thing for me. I think what eventually helped me get through that transition was recognizing that it really was a new beginning," said Richter, who graduated in 2003.

"Certainly, as a person, I was shaped by my experiences at OHIO and before, but moving out into the world, you’re really starting with a clean slate. Recognizing that and embracing it is nothing short of an adventure," he added.

Richter's adventure led him to Wisconsin for law school and then on to a law firm in Madison, where his star would rise quickly, success coming atop hard work.

He's now a full partner at DeWitt LLP, was chosen as a member of the 2019 40 Under 40 Class of "In Business Magazine," and was recently inducted as a Fellow of the Wisconsin Law Foundation.

But it all started back in Athens....

Q: What path did you follow to get where you are today?

I started my path while still at Ohio University. I was midway through my sophomore year and had not chosen a major and was still fairly unsure what I wanted to do after graduation. The father of a high school friend, who happened to be a lawyer, mentioned to me during a break that I should consider a pre-law path. To this day, I’m not sure why that stuck in my head more than other options presented or suggested to me, but it did. I ended up majoring in political science – pre-law. While working through this path, I took several law classes at OHIO, all of which ended up being among my favorite classes.

I ended up taking the LSAT and applying to a number of law schools and in the end chose the University of Wisconsin Law School. UW was my final choice for several reasons, including that it is a top tier law school in the Midwest and is located in the state capital of Wisconsin (offering numerous potential employment options both during school and after graduation).

While studying at UW, I was hired for my second summer of law school at what was then DeWitt Ross & Stevens SC and is now DeWitt LLP as a summer law clerk. I ended up earning a full-time job offer and have, in a pretty rare situation, been at the firm ever since, starting as an associate attorney in 2006, becoming a non-equity partner in 2014 and a full partner in 2015.

I have been lucky to spend my entire career at one firm, practicing in the areas of mergers and acquisitions, general contract work and commercial real estate.

Q: What has been your greatest success/achievement in your career?

I’ve had the opportunity to help clients with some amazing projects, from assisting with the development, financing and construction of The Sylvee, a large live music venue in Madison, to being lead counsel on many complicated multi-million-dollar transactions, to helping family businesses ensure their legacy passes to the right hands. In the end, though, those are successes of my clients that I’ve just been a small part of. (Connect with Brody Richter on LinkedIn.)

Q: Who were your favorite professors and how did they make an impact on your life?

Hands down my favorite professor was John Gilliom. Professor Gilliom taught several of the constitutional law classes that I took while at Ohio University. He made the subject matter more than just what was written on a page and gave it living context. I would say it was a mix of his teaching style and the coursework. Even though I ended up becoming a transactional attorney focused primarily on mergers and acquisitions, I loved and still love reading about constitutional law and that all came from his classes. I would say that his teaching prepared me to better ease into law school because I’d already been tasked with reading legal decisions and understanding that the facts and decision are not always what’s important, often it is the policies or politics underlying the decision that need to be considered, discussed, and debated.

Q: What was your ah-ha moment at OHIO—that point where you said to yourself, “I’ve got this!”?

I think it was likely early in my junior year of college. I was mostly taking classes associated with my major by that point. Studying and time management had started to become second nature. I had realized towards the end of my sophomore year that a couple hours in the library every Saturday morning, on top of the just daily work, allowed me to stay ahead of the game in most of my classes while also just keeping me organized. That time was not always used to specifically complete work for classes as much as it was to review, and organize, my notes for the coming week. It was not a ton of time out of my week, but it paid huge dividends when finals rolled around.

Q: What are your favorite OHIO memories?

Many of them likely aren’t fit for print! In all honesty, so many of them are the little things: grabbing a slice of GoodFella’s for lunch, having a drink (or more) at Tony’s with friends, the ease of living in the dorms and being down the hall or up a flight of stairs from great friends. But, if I had to get specific, the week of graduation is a time that won’t ever leave my memory. Once finals were over and all the papers were turned in, we were all able to just enjoy our last few days in Athens before moving on to various places and ventures. Spending that time with my friends, whether it was at an establishment on Court Street, or swimming at Strouds, those are some times I’ll cherish.

Q: What’s the one thing you would tell a new OHIO student not to miss?

Ohio University is this special place in the world and special time in your life. Obviously, you’re there to get an education and that should not be discounted. However, it is the overall experience. You’re in this amazingly beautiful setting (the most under-rated college campus in the U.S. in my opinion), with your best friends. You don’t yet have the responsibilities that come when college ends and you can, for the most part, be pretty singularly focused. Don’t waste it. Live the college life to its fullest. Take care of the education, but also make sure you enjoy all the other things Athens and OHIO have to offer, from the restaurants and bars, to the athletics, to the amazing state and national parks within a short drive of campus. For many people, myself included, when you leave Athens, it isn’t the easiest place to get back to and visit, so you don’t know when you’ll be back. And, even if you do, it won’t ever have that same magic it does when you are living in it every day. Take in all the experiences you can and focus on ending college knowing that you built memories and relationships that will last a lifetime. Oh, and eat as many: burritos from the Burrito Buggy, slices from GoodFella’s, and bagel sandwiches from Bagel Street as you can.