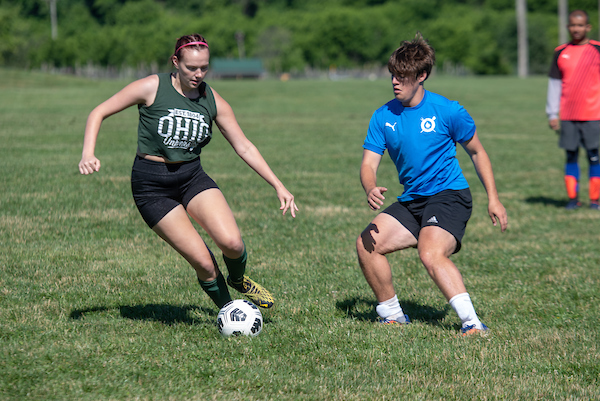 Ohio University owns the golf driving range east of the West State Street Park. Though it will retain the driving range for golfers, the space between the golf range and the University’s Innovation and Research facilities will serve as the new soccer field.

“The city of Athens is thrilled with the opportunity that comes with this new partnership,” said Andy Stone, service safety director of the city of Athens. “The West State Street Park complex is a beloved recreation area serving wide swaths of the city, the University and the greater region.”

The relocation of the field follows the urging of the local soccer community, who grew frustrated with the constant flooding and poor turf conditions of the old field on East State Street. A short-term arrangement was made in May that will extend through the end of the year. After that the city and the University will have a long-term deal on land use.

“The addition of soccer on good turf is a logical additional use in this area, which benefits the University and the community. It truly is a win-win partnership,” Stone said.

Through the collaboration between the city and the University, golfers and soccer players will coexist sharing a large green space that is agreeable to their respective sports and will eventually be separated by netting. Meanwhile, with the absence of soccer players on East State Street, the city of Athens will retain the field for land improvements.

“Supporting the recreational activities of our whole community benefits everyone, including our students,” said Mark Ferguson, executive director of Well-being and Recreation. He said the new arrangement and planned improvements will maintain the driving range and add quality field space for students and the community to enjoy while making use of underutilized space.

Katherine Ann Jordan, director of the Athens Arts, Parks and Recreation department, worked alongside Athens Ohio Soccer Organization to identify ways the city can support its soccer community. She also participated in conversations with Ohio University

“I am incredibly excited to see all of our hard work come to fruition. This is a great example of how the city of Athens and Ohio University work together to support our community's needs,” she said. “Together, we can continue to create new and better opportunities for all of our community.”

“It is exciting to see the city of Athens and Ohio University working together to build a permanent home for soccer in Athens,” said Shauna Switzer of the Athens Ohio Soccer Organization. “Although there is still much to be done to the new facility, we look forward to a future where the West State Street location becomes a true recreational sports and community hub for our region.”

She said that soccer is a multi-generation sport that attracts players of all ages and skill levels from across southern Ohio to play in Athens. Stone also noted that the park attracts all sorts of recreators, from children playing baseball and softball, to dog walkers and cyclist.

“Great things happen when we work together,” Switzer said.

Ohio University and the city of Athens have a history of working collaboratively to serve both OHIO students and the community of Athens.

“The city of Athens and Ohio University have a long history of working closely together to better our shared communities,” said Shawna Wolfe, associate vice president of University Planning. “Part of that is because of our ability to sit down together and share and discuss our needs together with an understanding that we are better when we care together.”

In 2018 Ohio University and the city of Athens won the Larry Abernathy award for fostering a sense of place from the International Town & Gown Association. Both were recognized for their cooperation in fostering a sense of place for students, community members and visitors to Athens and OHIO. Recognized projects include the Ridges Framework Plan, Richland Avenue Pedestrian Pathway, East State Street improvements and the Bobcat Pass program.