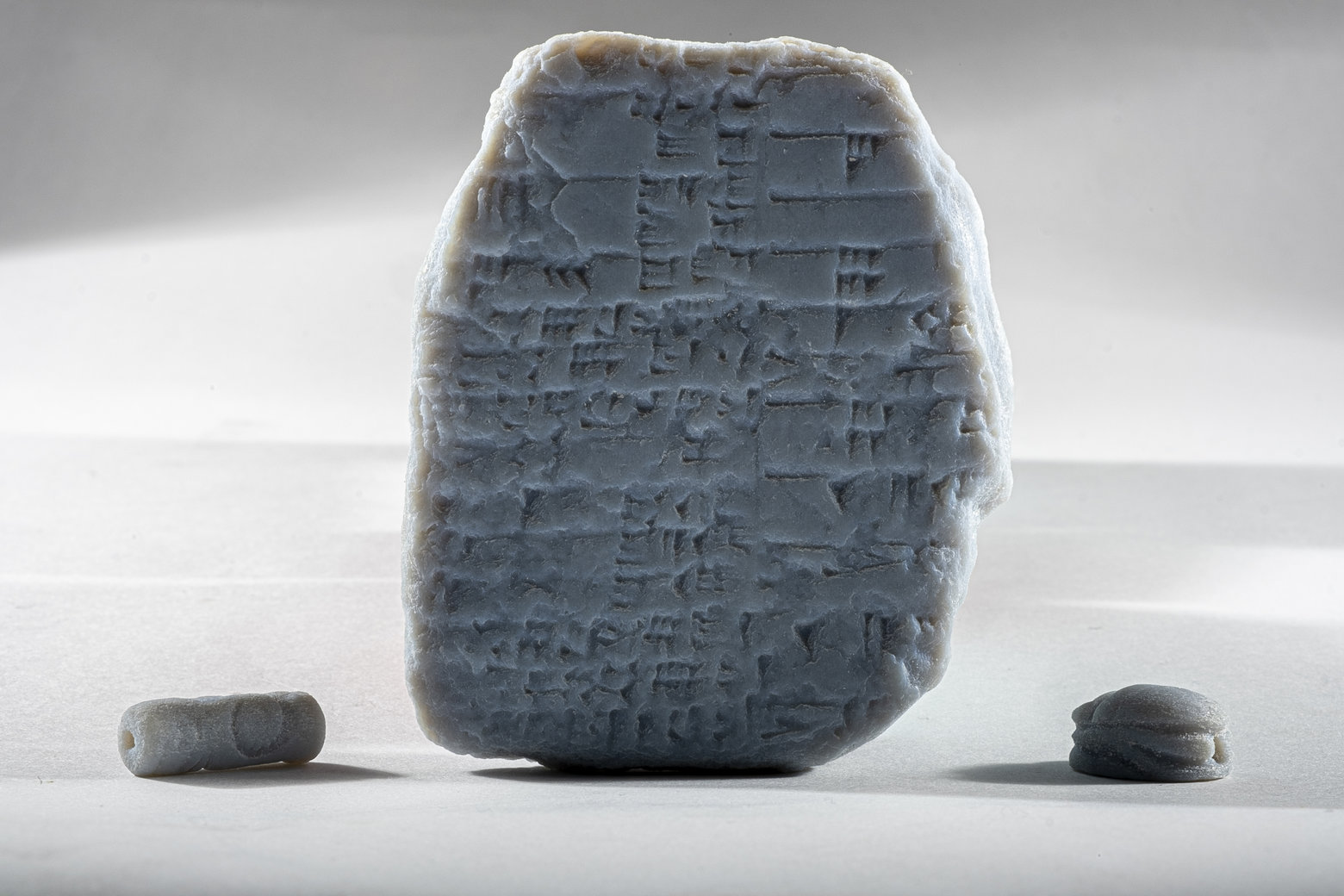 Photo by James Year/Ohio University Libraries. 3D printed replicas of the Pages of the Past artifacts.

A new project at Ohio University is using high-tech tools to bring ancient artifacts into the digital age—and into the hands of students and the general public.

The University Libraries worked with scientists and lab managers at the Heritage College of Osteopathic Medicine and Innovation Center to create 3D images and printed replicas of a clay tablet, scarab seal and cylindrical seal in the University Libraries’ Rare Book Collection. The artifacts, which are unusual items in the collection, were part of a package of materials distributed by publishers in the early 20th century to help libraries educate the public about the history of book and printing production.

The objects—created in Babylonia, Mesopotamia and Egypt between 1000 and 2800 B.C.—are too fragile to be routinely handled by scholars, students or others interested in examining these ancient tools of communication. Librarians Miriam Nelson and Miriam Intrator began to explore how they could make replicas of these artifacts that could be viewed more widely. Using shared equipment and facilities at Ohio University, the librarians were able to create two versions of these delicate objects.

The university’s microCT scanner, located at the Konneker Research Labs on The Ridges, can take detailed digital scans of small inanimate objects. Ohio University scientists and engineers have used it for a wide variety of studies. Lawrence Witmer, a professor in the Heritage College who is director of the microCT facility, has used the equipment to take a closer look at bird and reptile specimens for his studies on the anatomy of modern animals and dinosaurs. Plant biologists have scanned maple seeds to understand forest health, and civil engineers have run chunks of asphalt through the machine for a detailed view of the material.

“If we can fit it in there, we can scan it and help people figure out how they can make use of the data,” Witmer said.

Ryan Ridgely, a research associate at the Heritage College, works with Witmer to turn the scans into 3D images, which can be uploaded to a website where users can digitally turn the object and zoom in to study its details.

Although the images are not in color, they can provide an incredibly sharp view of objects such as the clay tablet and seals—as well as reveal information that wouldn’t be apparent from simply handling the object and examining it with the naked eye, or by looking at a photograph.

Using the microCT scanner, the researchers could take images of the cylindrical seal, for example, and digitally unroll it to clearly show the scene etched onto it. (View here: https://poly.google.com/view/dxQQDtx6Y1K)

“The 3D imaging aspect of it was unexpected—we were just focused on creating a surrogate for people to handle to avoid damaging the original artifact,” Nelson recalled, adding that “the digital object is more legible than the 3D print or original, which is exciting.”

Misako Hata, the laboratory manager for the Innovation Center, used the scans to 3D print the three artifacts. The center is home to the Additive Manufacturing Lab, which features the Objet350 Connex 3D Printer—the most sophisticated, precision 3D printer in the region—and several other 3D printers, a vacuum former and milling machine.

The resulting items, made of resin, provide easy-to-handle replicas for scholars and students to examine.

Like the microCT scanner, the Innovation Center’s 3D printer typically is used for different purposes, such as product prototypes developed by entrepreneurs and startup companies. But it also has been used for a wide array of projects, from creating jewelry and holiday ornaments to crafting a wheeled cart for a puppy born without front legs. Witmer’s research team has used it to 3D print skulls of dinosaurs and giant extinct birds.

As for the University Libraries artifacts, the replicas now can be easily studied by scholars and already have been used in several classes. Cory Crawford, an associate professor of classics and world religions, also has expressed interest in examining the items as part of his larger research interest in ancient near eastern iconography.

Librarians Intrator and Nelson are enthused about continuing to work with advanced technology in order to make more items from the university’s collections available in digital or 3D printed replica formats.

“It allows us to hit that sweet spot between access and preservation,” Nelson said.

Links directly to the 3D models in Google Poly

Link to the Mahn Center for Archives and Special Collections

Link to the Libraries Digital Archives