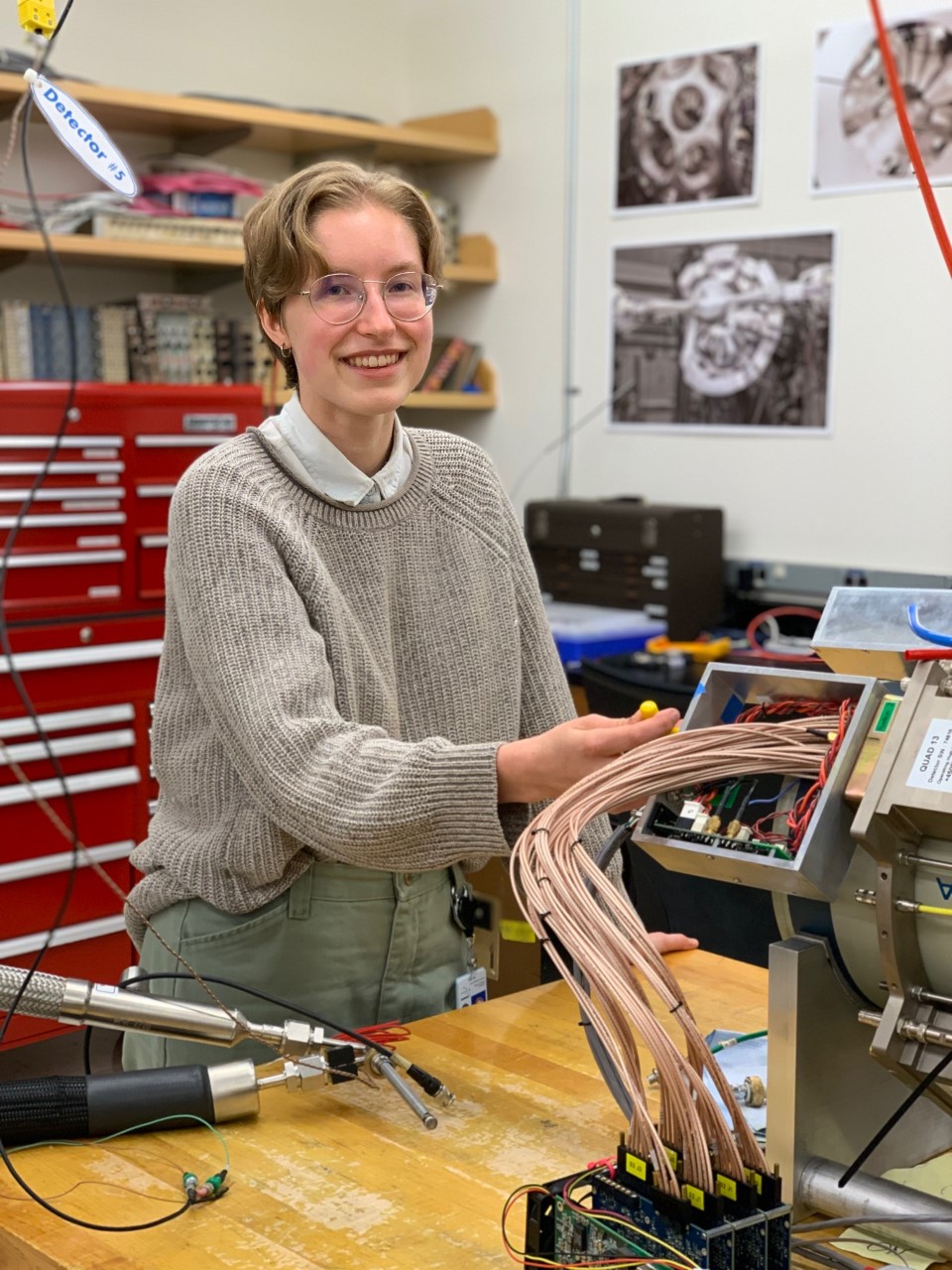 Ohio University student Emma Rice, an upcoming senior and physics major in the Honors Tutorial College from Marysville, Ohio, was recently named a 2021 Goldwater Scholar for her physics research.

During the summer of 2020, Rice began a remote internship with the Low Energy Nuclear Structure group at Lawrence Berkeley National Lab (LBNL). For the past few months, Rice has been living in California and working in person in the lab.

“Being named a Goldwater Scholar is a great honor and has helped me feel more confident in myself and my research,” Rice said. “I’m grateful for the recognition and the chance to connect with the community of scientists doing fascinating research in different fields.”

Rice realized her interest in nuclear physics after attending Nuclear Science Summer School at Michigan State University in 2019. Unbeknownst to her, an experiment later that year would be the source of the data she works on today.

Currently, Rice studies the nuclear structure of 66Fe (iron-66) and neighboring nuclei using gamma-ray spectroscopy. Studying the structure of the exotic nuclei teaches us more about fundamental interactions of matter.

“The nuclei that I study are very unstable and decay by emitting gamma-rays, which are high-energy photons (particles of light). Gamma-ray spectroscopy is the study of the energies and intensities of these gamma-rays, which can teach us about the structure of the nuclei. Each nucleus has a unique spectrum of gamma-rays; it’s like a fingerprint,” Rice explained.

The nucleus, or center, of every atom is made up of protons and neutrons. While naturally-occurring iron has a total of either 28, 30, 31, or 32 neutrons in the nucleus, the isotopes of iron that Rice studies have about 40 neutrons. Near stability, 40 neutrons would be a semi-stable configuration, but that isn’t the case for the neutron-rich 66Fe, Rice said.

“Instead, we see a collective rotation structure – basically the nucleus is deformed/smushed, instead of being spherical like we see in stable isotopes, and it spins about its axis. When we compare this behavior to systems like 67Co (cobalt-67), where we’ve added one proton, or 65Fe, where we’ve subtracted one neutron, we can learn how nuclear structure varies as a function of the number of protons and neutrons,” Rice explained.

Rice’s goal is to determine a level scheme for 66Fe, along with 65Fe and 67Co, from the data she is analyzing in order to share that information with the wider nuclear science community by publishing her results, hopefully within the next year.

“When I started out working with Dr. Crawford and Dr. Macchiavelli, I knew very little about nuclear physics. They’ve shown so much patience and kindness – and invested so much time – as they’ve taught me how to conduct this type of research and the theory behind what we do. I couldn’t ask for better mentors,” Rice said.

“Emma is fantastic to work with. She works at a level more similar to a graduate student than an undergraduate, and is so quick to pick up new concepts and techniques, that it is in many aspects a colleague type relationship vs. a mentor-mentee relationship,” Crawford said. “Of course, in addition to being smart and dedicated, Emma is just a great person, very easy-going and open. It’s been a pleasure for all of us in the nuclear structure group at LBNL to work with her.”

Rice is one of three Goldwater Scholars for OHIO in 2021.

“I couldn’t be happier for Emma with the Goldwater Scholarship,” Crawford said. “She’s worked so hard and is such a talented student, academically and in research, it’s very well-deserved. I’m lucky that she had an interest in nuclear physics and reached out to me regarding research opportunities, which allowed me to work with her on the research motivation for the Goldwater, and to get to know her.”

Rice’s future plans include continuing to study nuclear physics while pursuing a doctorate and to eventually have a career in nuclear structure research. She is very grateful for all of the people that have helped her in her academic and research journey.

“I’d like to thank Dr. Carl Brune, Dr. Roxanne Male-Brune, Dr. Zach Meisel, Dr. Monica Burdick, and Dr. Chris Lewis for all their time spent helping me with my application; Dr. David Drabold for being a great director of study; and the low energy nuclear structure group at LBNL for welcoming me into their group,” Rice said. “I’m especially grateful to Dr. Heather Crawford and Dr. Augusto Macchiavelli for their mentorship.”