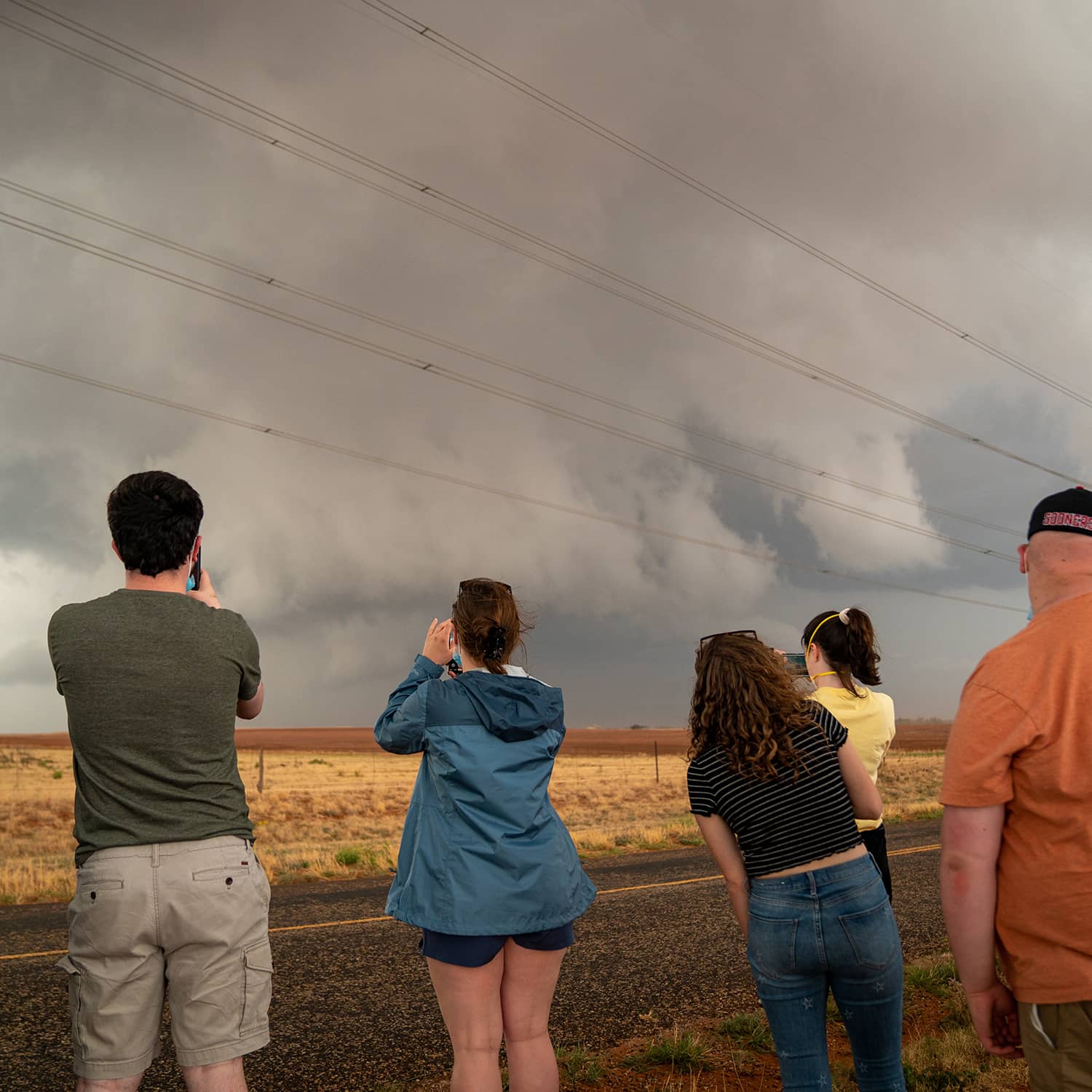 During the first week of May, 15 Ohio University students traveled to the Central Plains to follow supercell thunderstorms, observing them in real time and predicting where tornados may form.

The students, 13 undergraduates ranging from first years to graduating seniors and two graduate students, were guided in the storm-chasing experience by Dr. Jana Houser, associate professor of meteorology in the College of Arts and Sciences. The group journeyed through the Central Plains, including Texas and Oklahoma, during the peak of tornado season for the region.

“This is a completely immersive experience. The students are learning in the moment about severe thunderstorm structure – cloud features, airflow regimes, precipitation features – that simply are not captured fully in photos or even video,” Houser said. “They also experience immediate feedback (from nature!) regarding choices made about where to drive to see storms, which storms to target, and how storms respond to various environmental configurations.”

The unique experiential learning trip allowed students to also learn more about the factors impacting storm structures and gain an appreciation for the logistics in trying to reach the right storm at the right time in the right place to see tornados form, according to Houser. For many students, this was their first time traveling to the Central Plains and storm chasing.

“I have been interested in meteorology for a while, and being able to be out here in the field has allowed me to realize this is something I could possibly pursue or I’d love to learn about more possibly as a career,” said Hunter Uhl, a recent 2022 graduate of the environmental studies and geography programs in the Honors Tutorial College, with a minor in geography-meteorology and a geographic information science (GIS) certificate from the College of Arts and Sciences.

Students conducted weather briefings every morning, analyzing maps and weather data to determine what storm cells to chase next and where to travel to watch them develop. The students would also monitor weather conditions throughout the day in case they had to change course.

The highlight for many students on the trip was getting to see a tornado develop from a supercell thunderstorm in real time in Texas on May 4.

“I never really had hail bigger than like a penny maybe in the worst of storms,” said Eden Koval, a recent geography-meteorology 2022 graduate. In the middle of the storm, she thought to herself, “Oh, I've learned the structure of these storms. We’re in the hail pocket, and here it's coming right now,” she recalled. “That was really exciting. There was a lot of adrenaline running through all of us and we were just excited to be in the middle of it.”

“We saw [the tornado] from pretty much the time it initiated. We didn’t get to see the very end because it went into the overnight hours, but we got to see the wall cloud form. It was really cool to see these things that I’ve learned in class or online happen in real time,” said Colby Bryan, a junior geography-meteorology major. “When you see [the storms] in real time, it gives you a more realistic sense of how things work.”

Several students were excited for the storm chasing experience, noting that the trip helped them learn more about supercell formation.

“Our meteorology program is different; it is different than everywhere else. It’s more hands-on, and it’s more personal, and it just means the world to me,” said Cameron Cousino, a sophomore geography-meteorology major. “It’s an experience I wouldn’t trade for anything.” 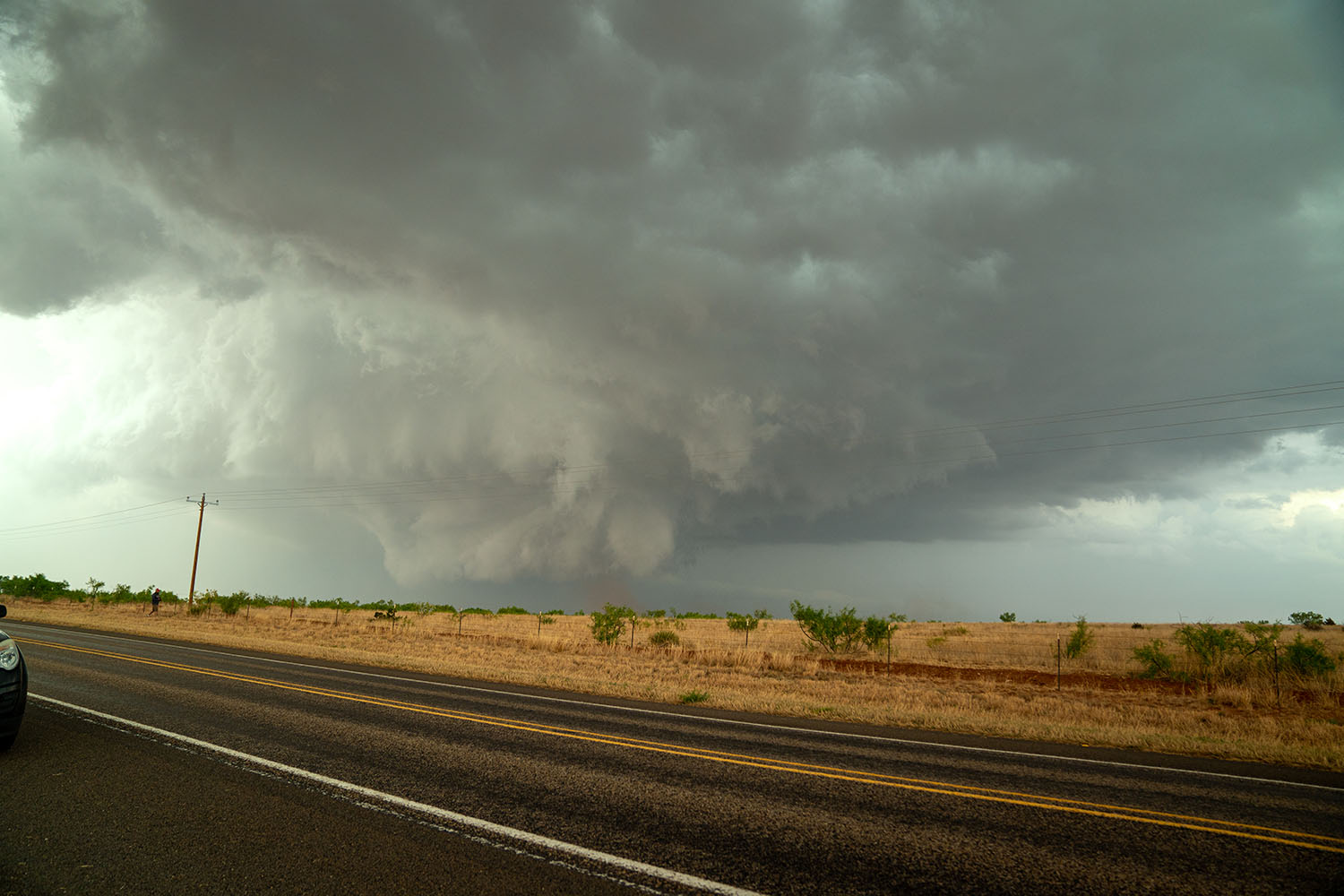 The students traveled to the Central Plains, which covers several states including Oklahoma and Kansas, to study storm weather. This featured storm cell was in Texas. 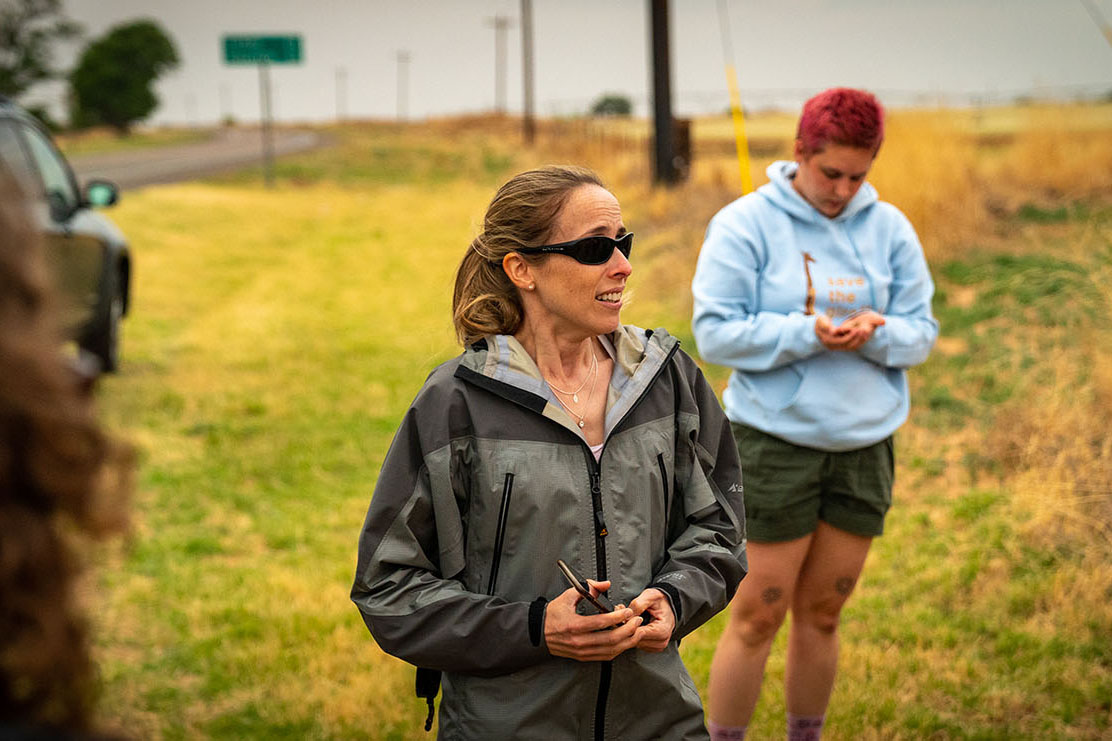 Dr. Jana Houser facilitated the group experience. She specializes in the study of supercells and tornados and has spent almost two decades storm chasing. 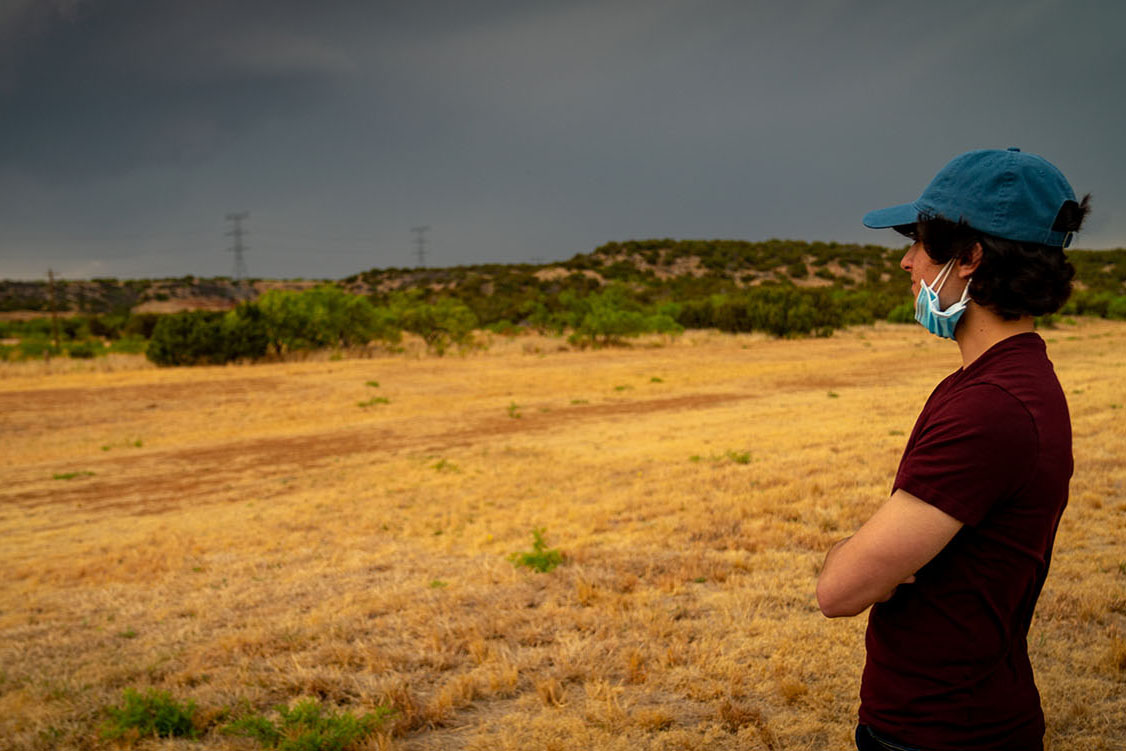 OHIO student James Zinnbauer watches the storm in the distance. 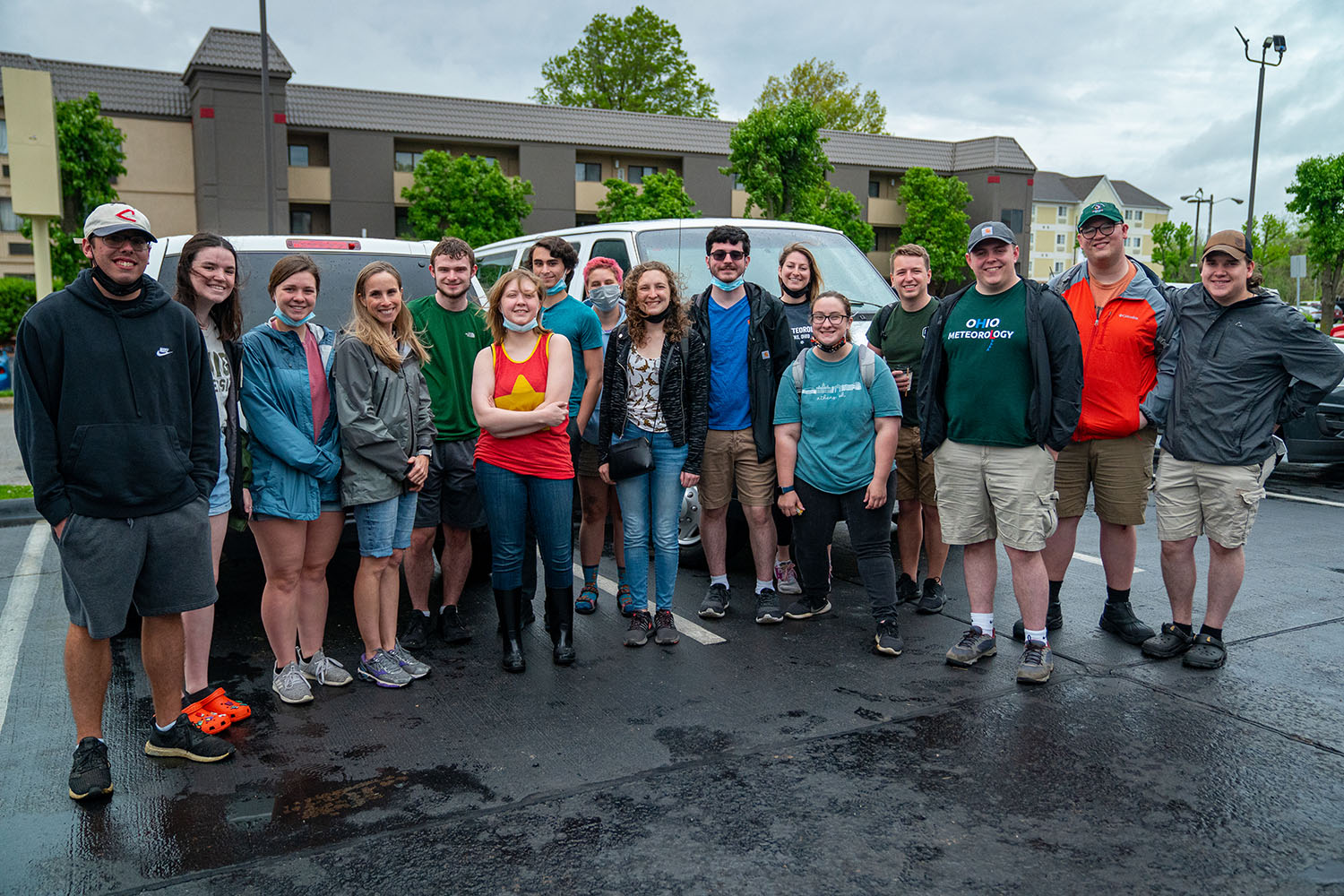 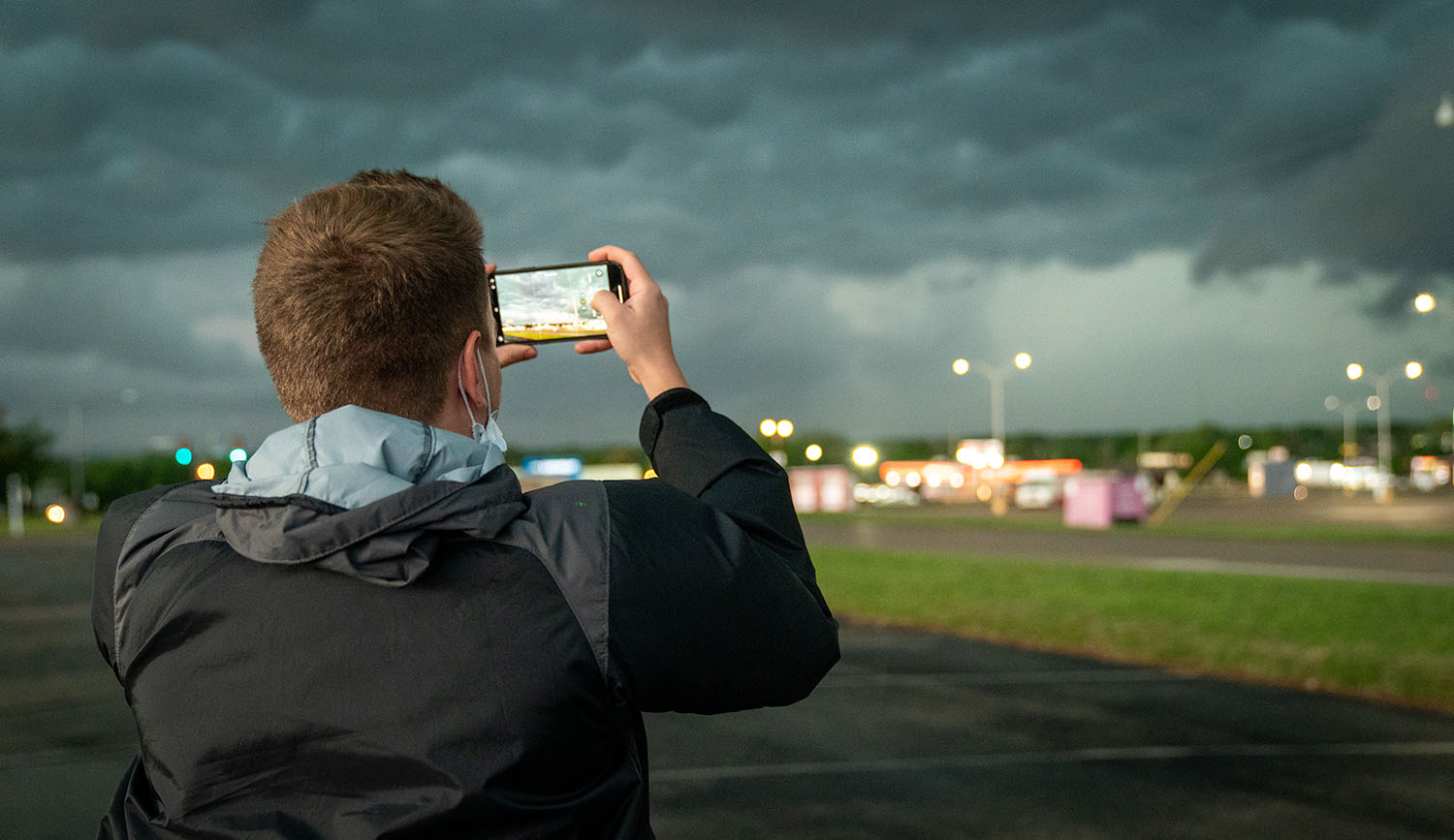 OHIO student Chris Ford takes a photo of a storm in the distance. 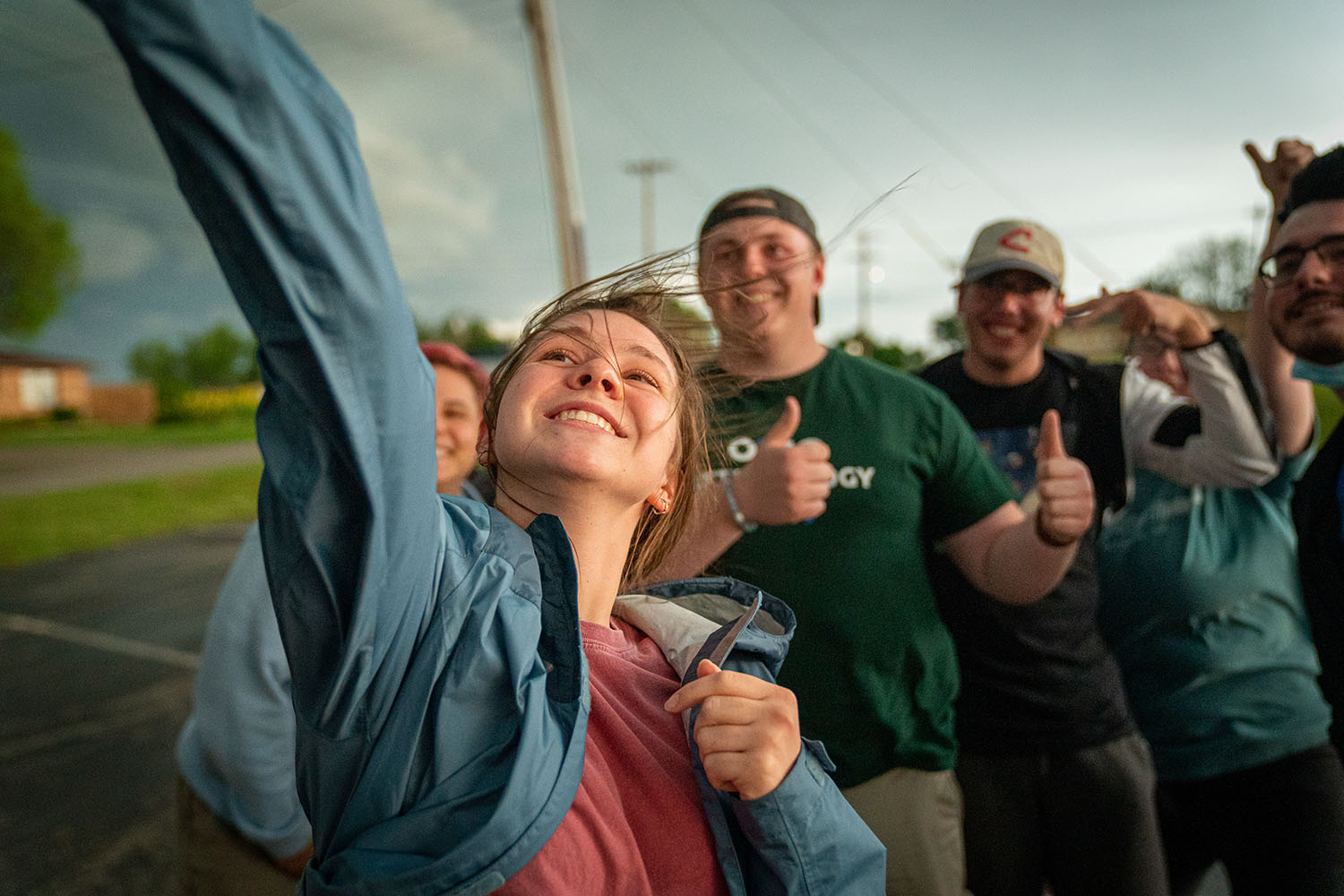 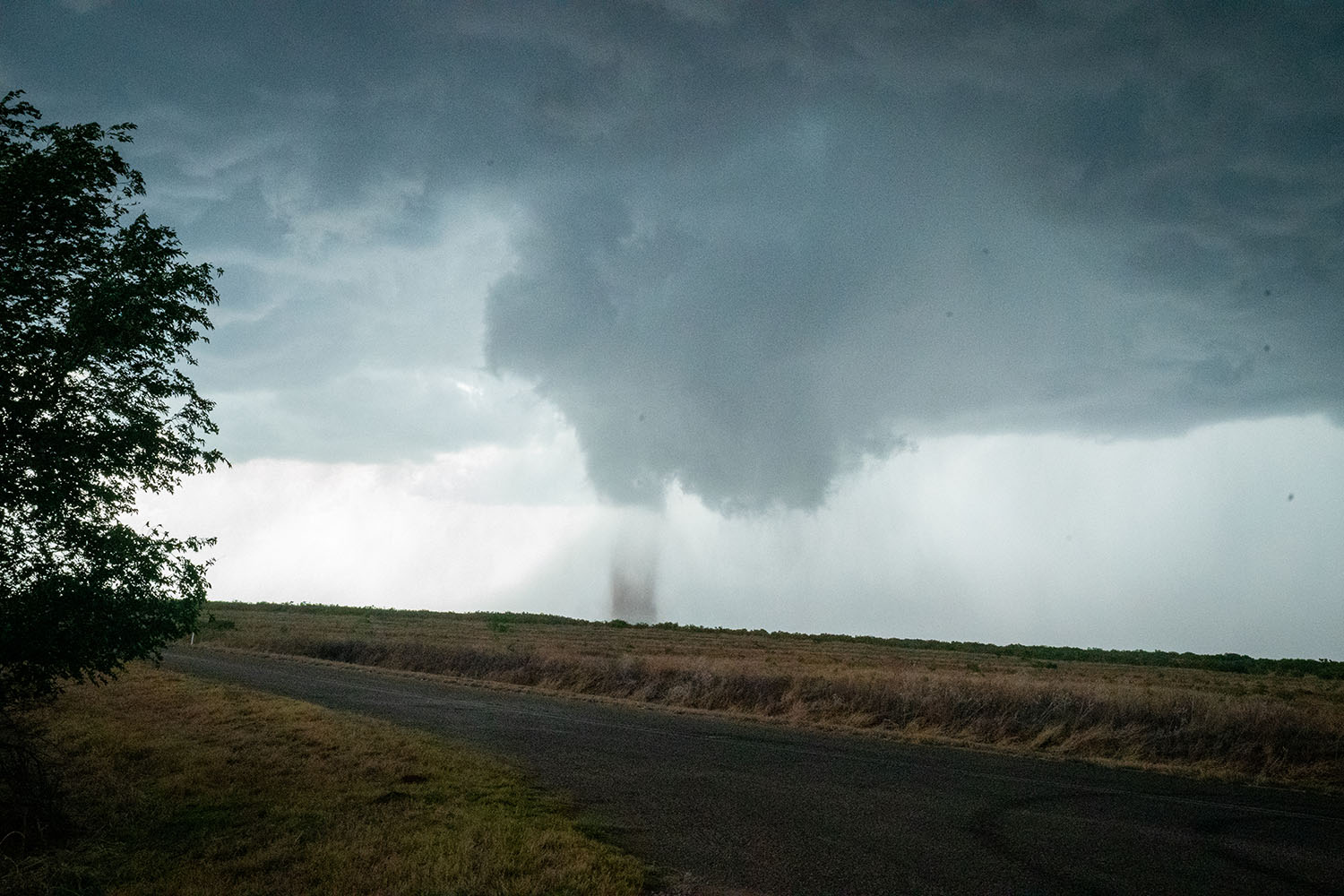 A tornado forms in Texas. “This was actually the best observation of this process I have personally had in nearly two decades of chasing because we witnessed the full range of the process.” – Dr. Jana Houser 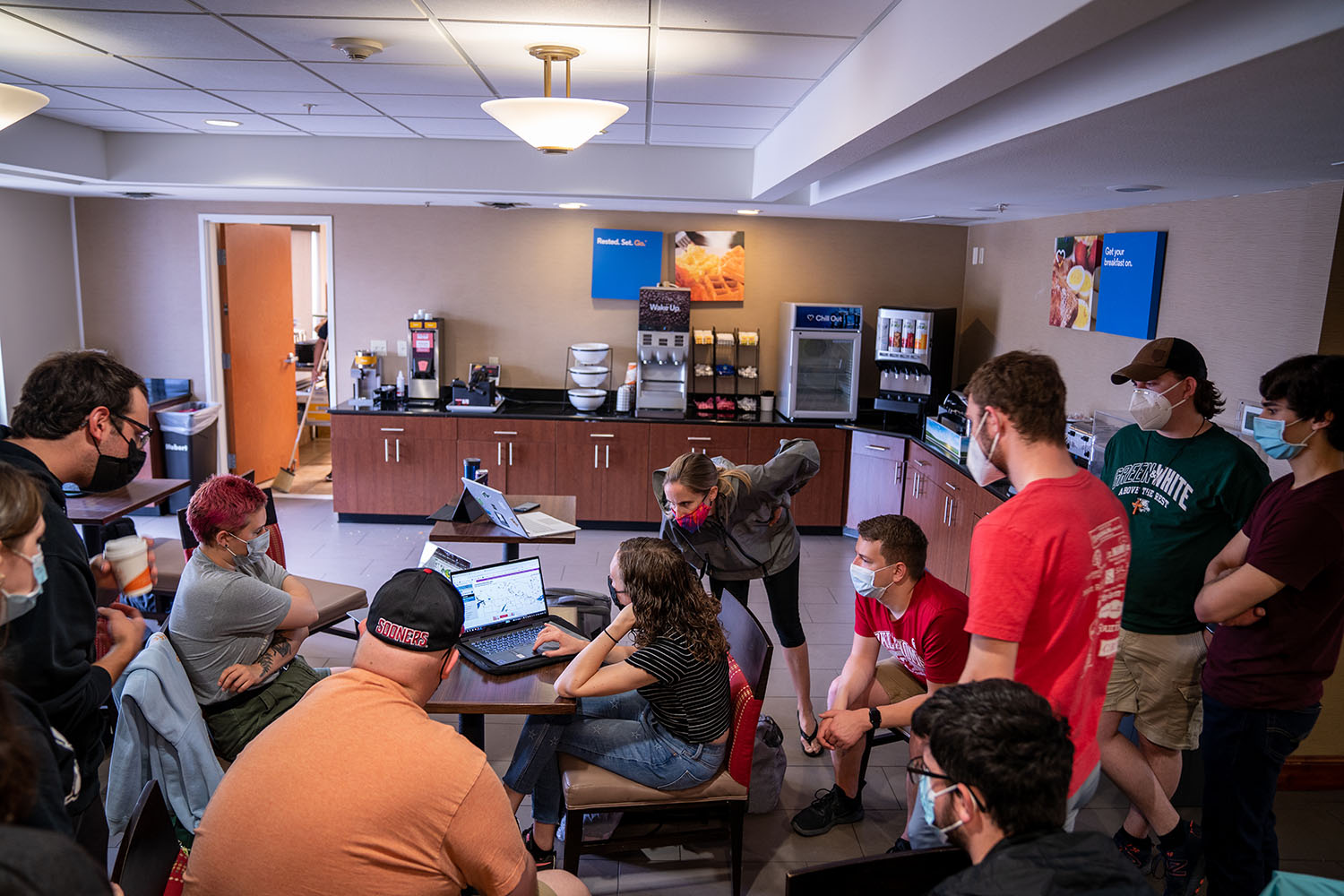 Every morning, the group would congregate in the hotel together to have weather briefings. During these meetings, they would determine locations to travel to for the day, by looking at updated weather mapping and storm data. 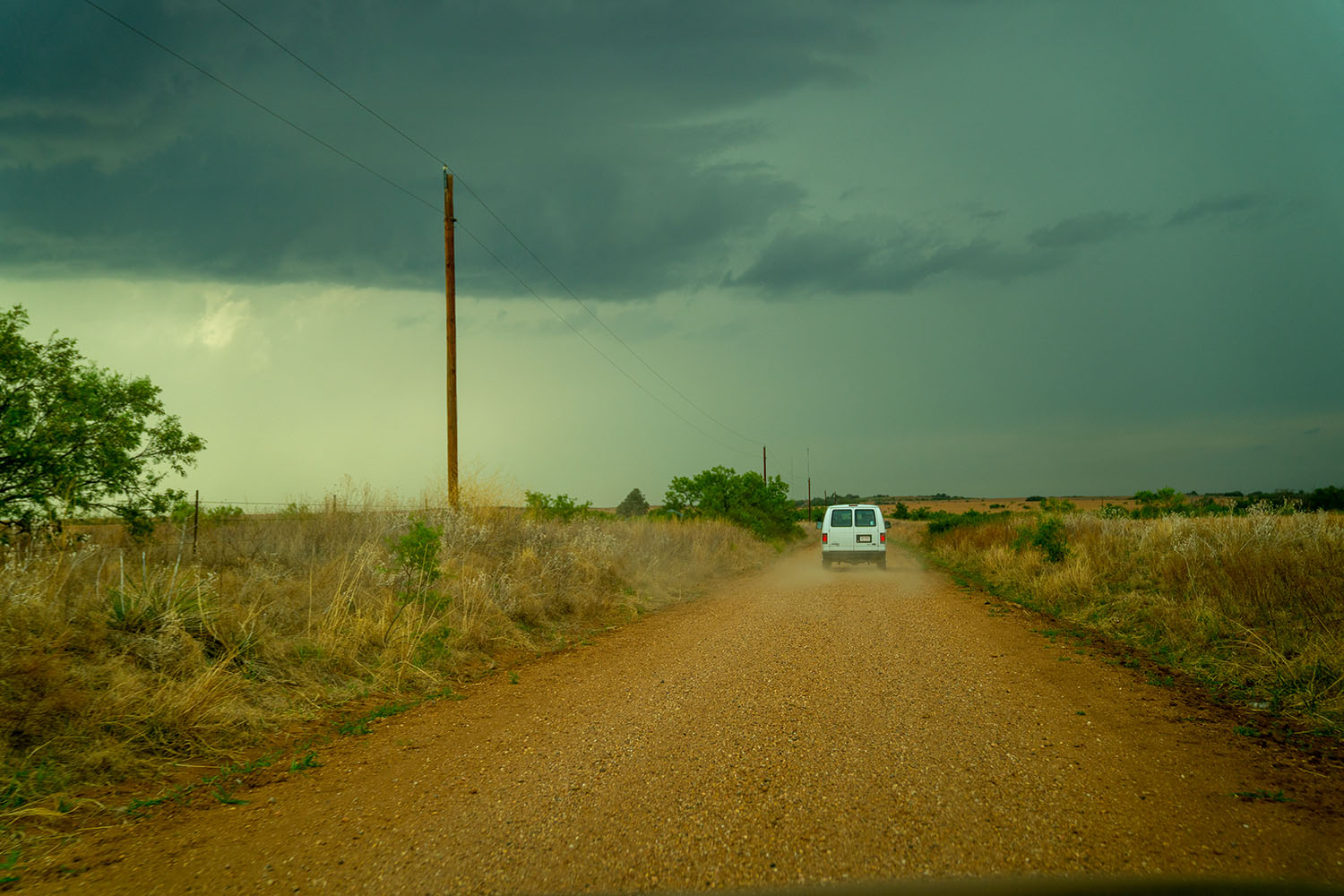 Students would travel location to location in the Central Plains, forecasting and targeting locations where severe thunderstorms were likely to occur. 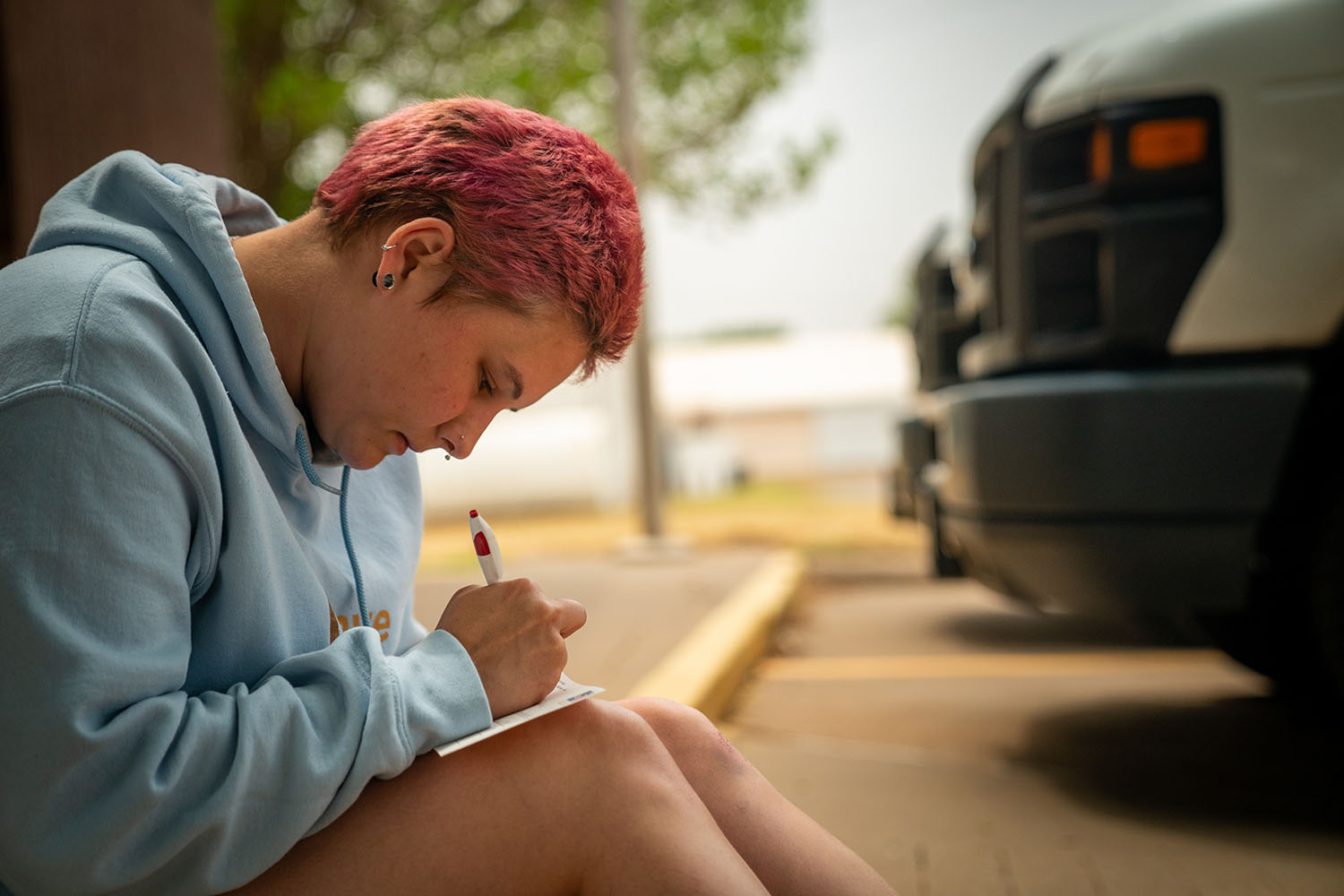 “I didn’t really know what supercells were like before this semester and now I do, and I’ve got to see one in real life.” – Hunter Uhl 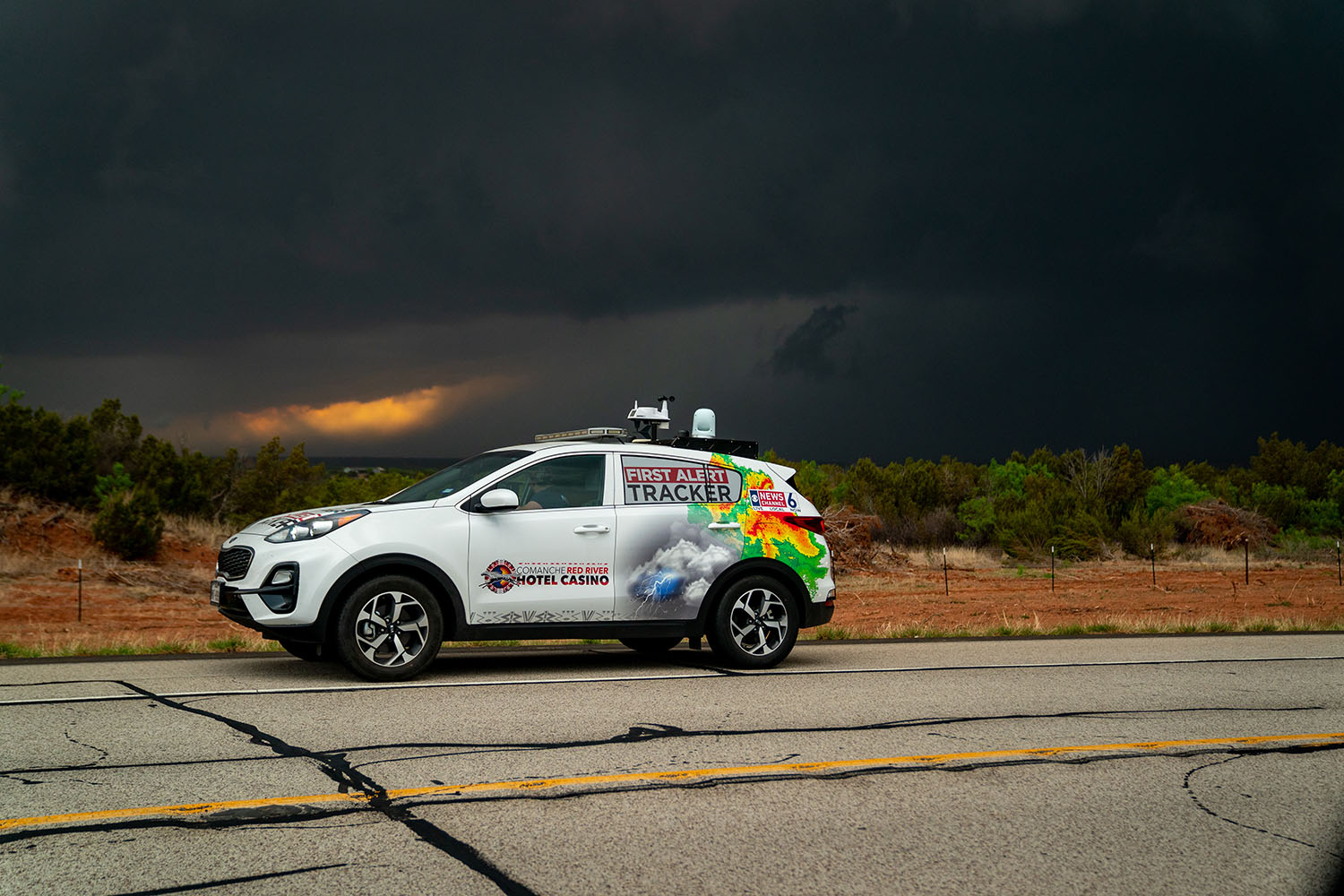 The students were not the only ones storm chasing, as the peak of tornado season is from May to early June. News weather vehicles were also out to report on the storms as they formed, like this one in Texas. 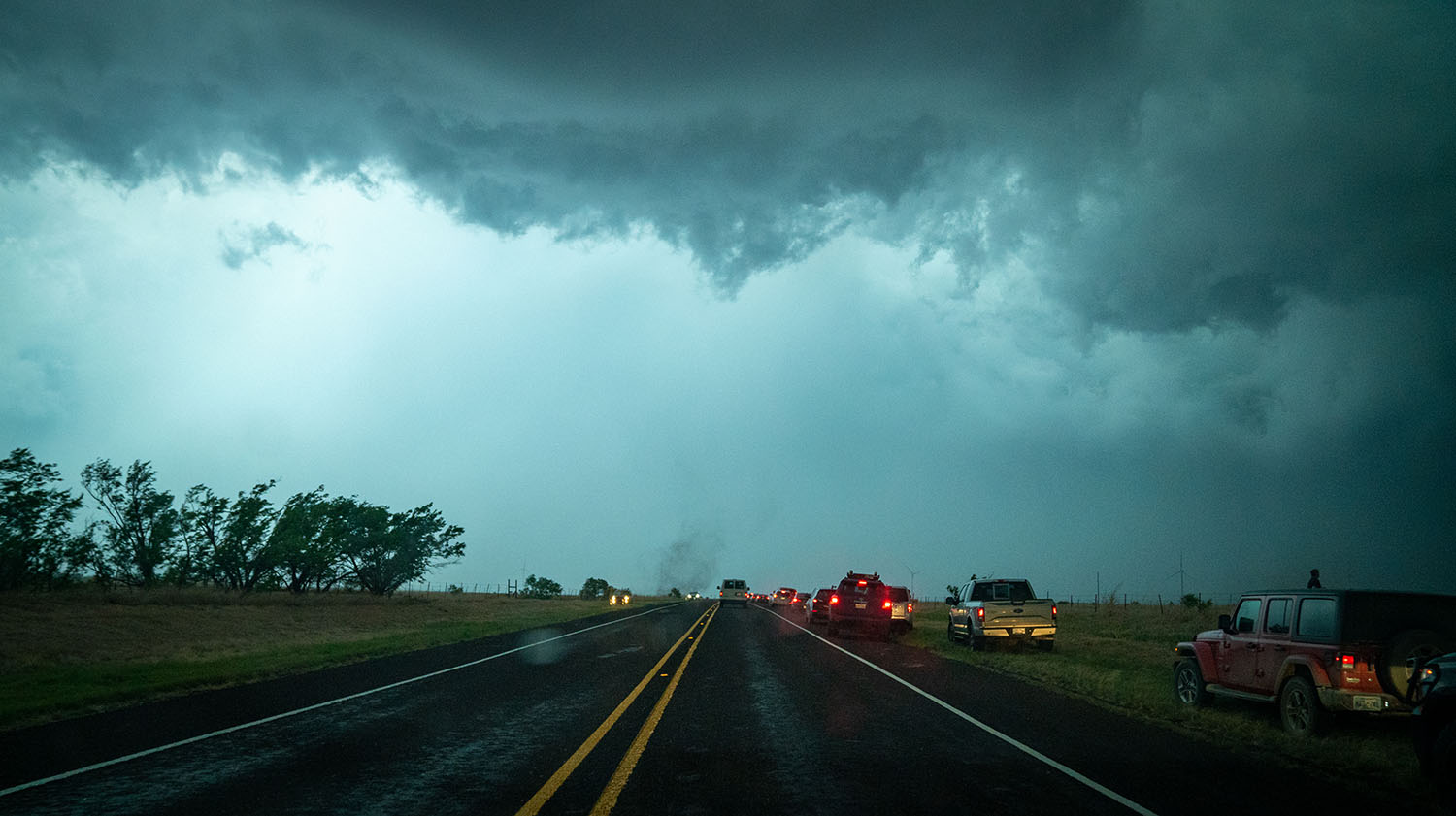 Storm chasers pulled off to the side of the road in Texas. 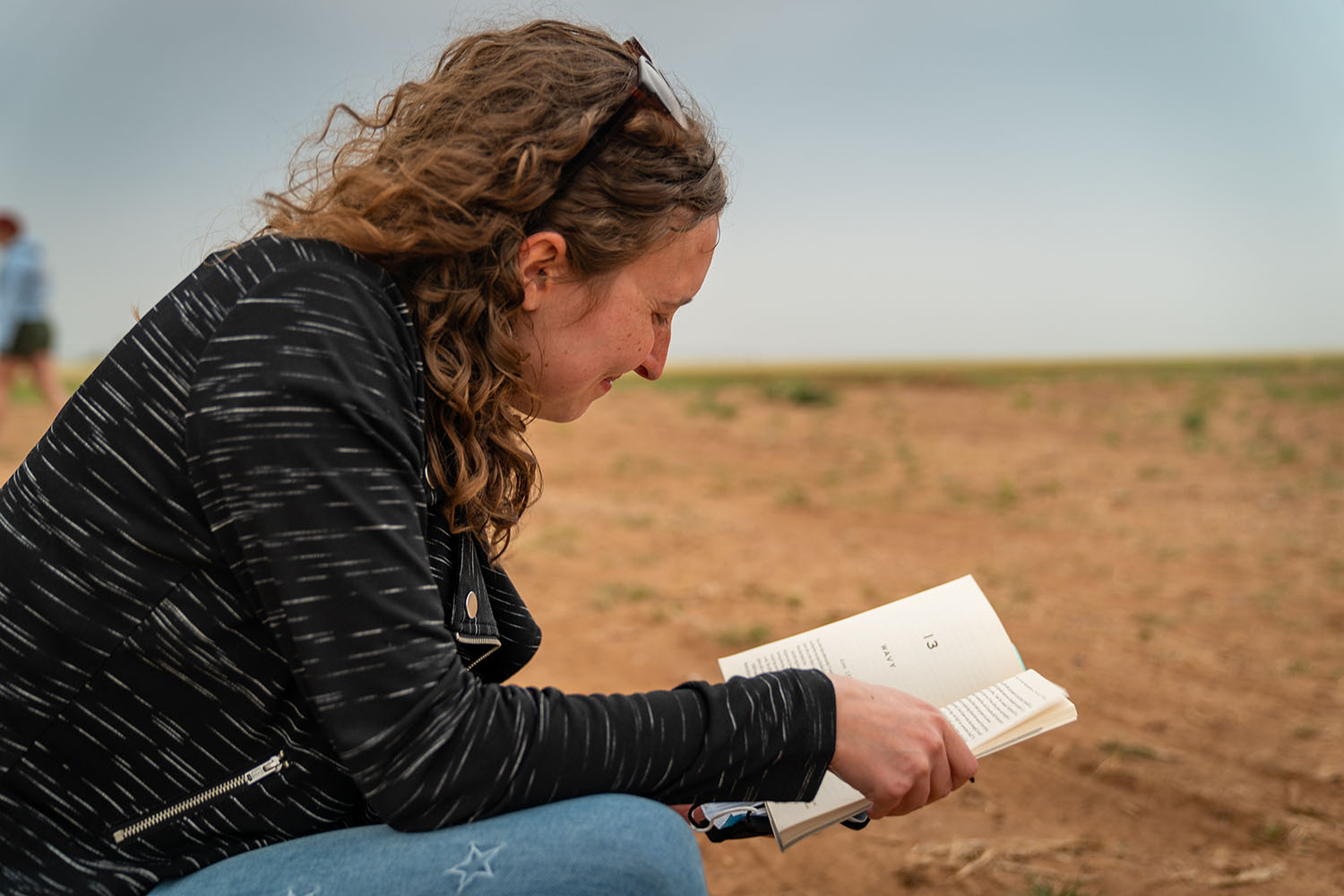 “I’ve never seen a tornado or supercells that I’ve known of. I’ve just lived in the city my whole life; you can’t see the skyline because the buildings are so tall. So, I was really excited to come with my fellow majors and other people in the program to actually see these things for ourselves.” – Eden Koval, B.S. ’22 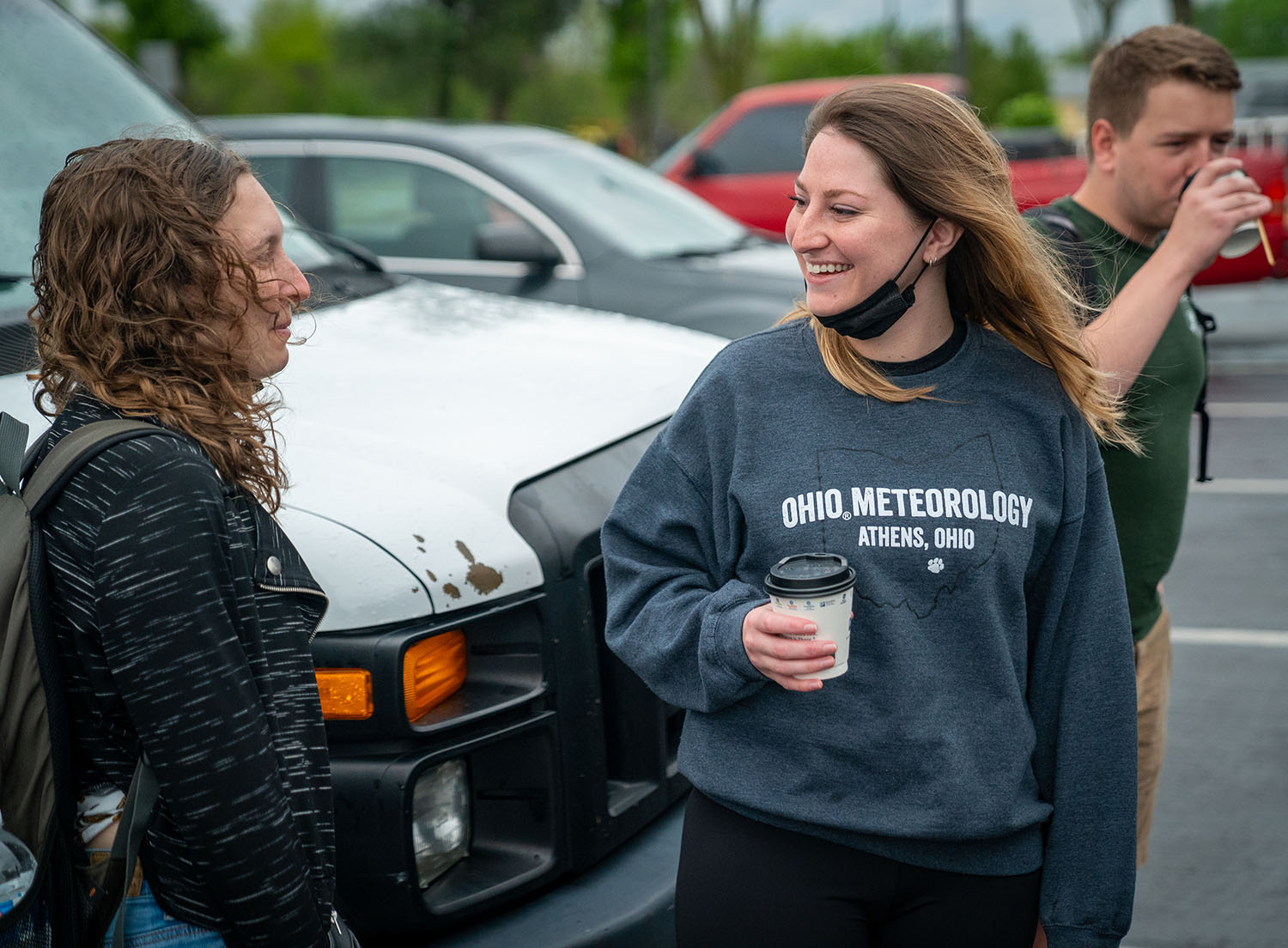 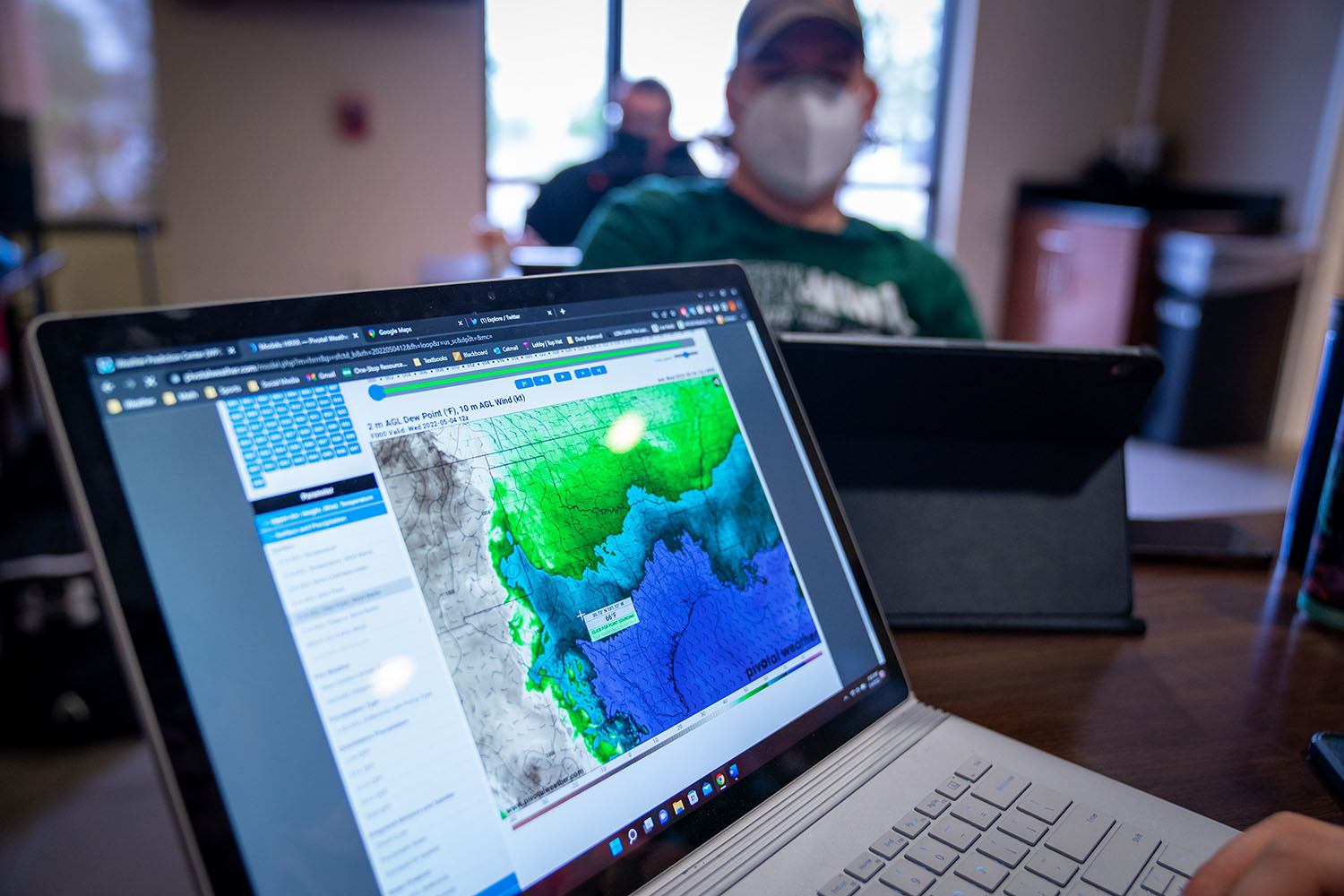 Students monitoring weather radar and patterns before heading out to chase the storms. 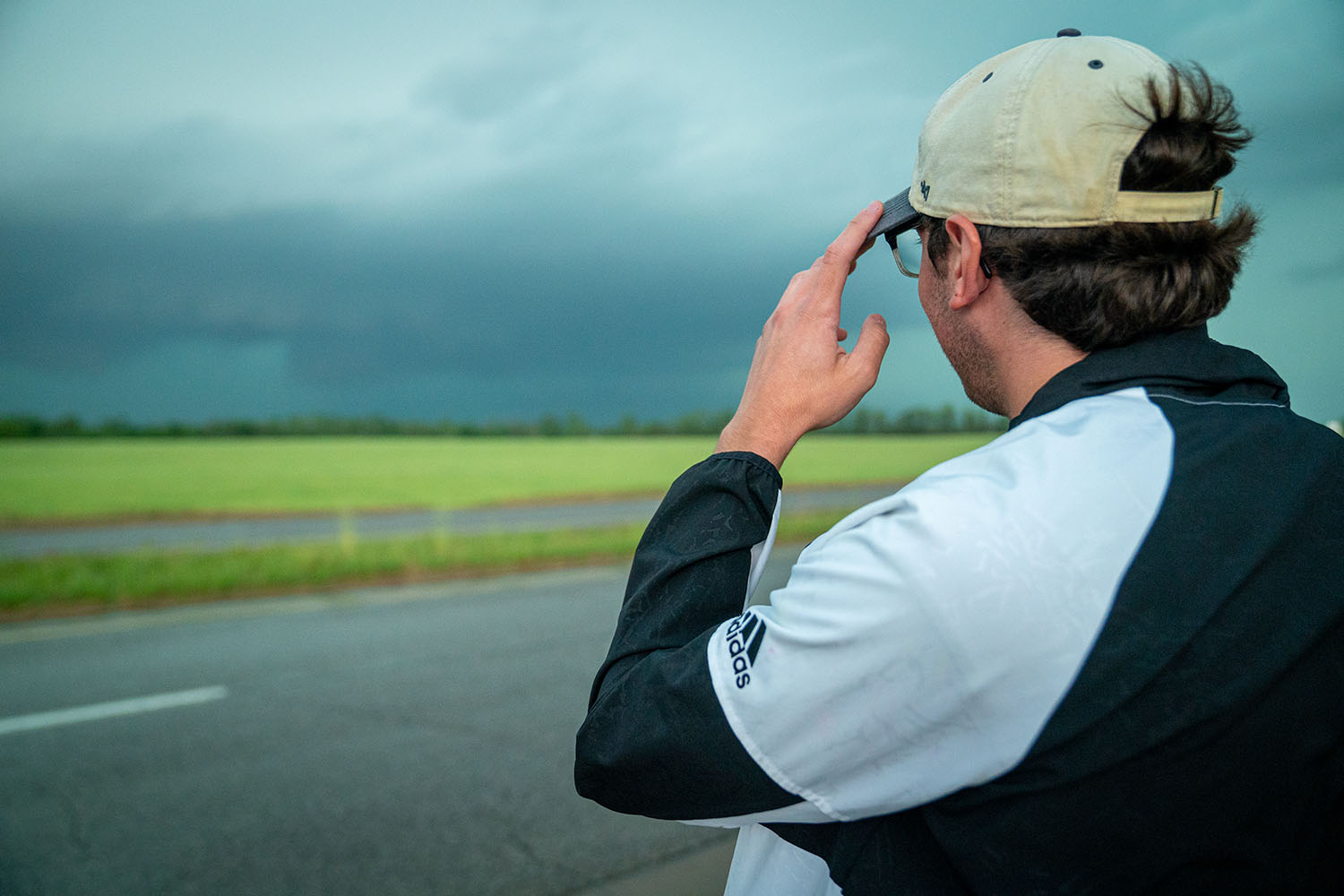