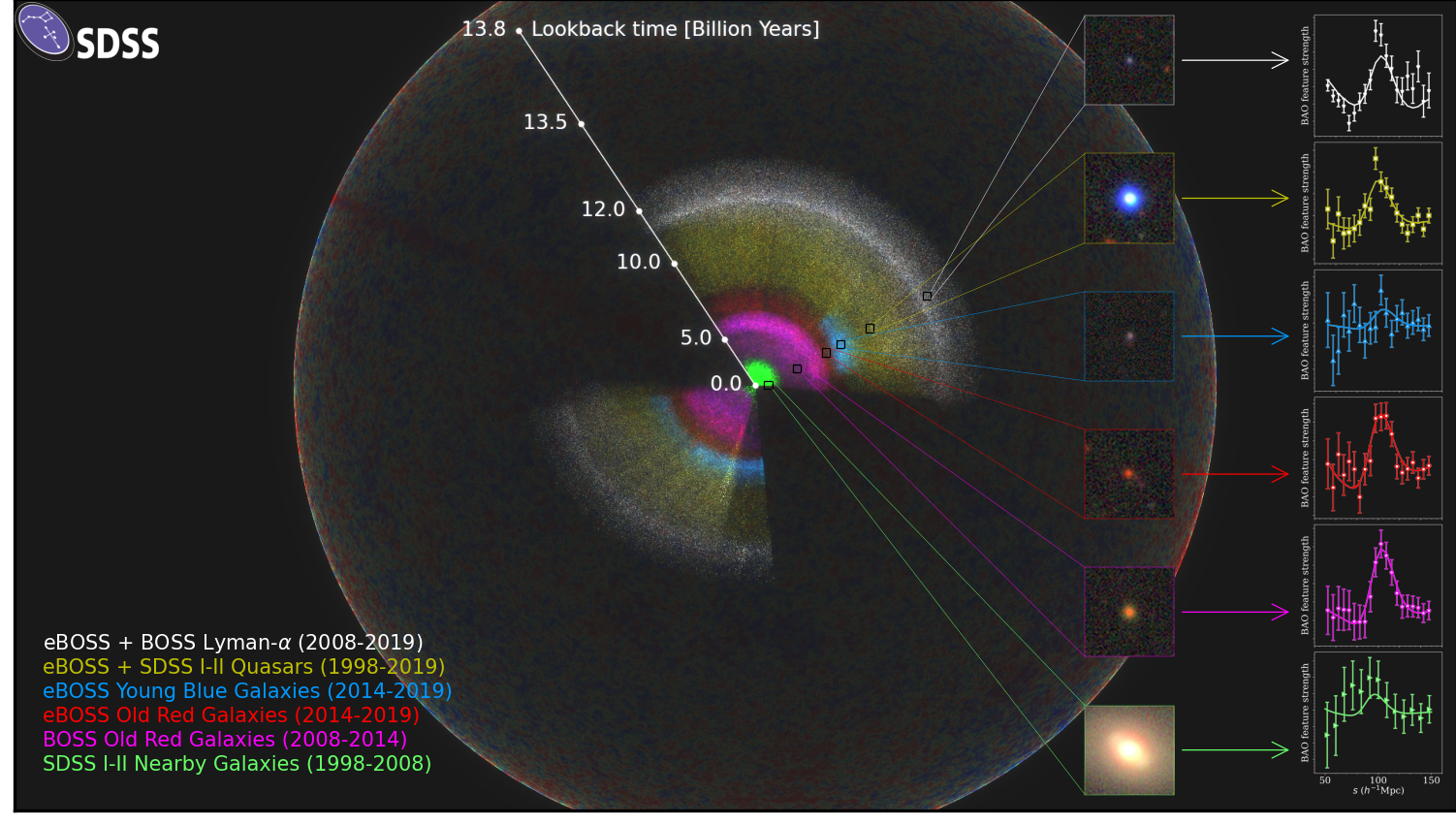 The SDSS map is shown as a rainbow of colors, located within the observable Universe (the outer sphere, showing fluctuations in the Cosmic Microwave Background). We are located at the center of this map. The inset for each color-coded section of the map includes an image of a typical galaxy or quasar from that section, and also the signal of the pattern that the eBOSS team measures there. As we look out in distance, we look back in time. So, the location of these signals reveals the expansion rate of the Universe at different times in cosmic history.

The Sloan Digital Sky Survey (SDSS) released today a comprehensive analysis of the largest three-dimensional map of the universe ever created, filling in the most significant gaps in the possible exploration of its history, and Ohio University researchers played key roles.

The highlights of the research include:

"We know both the ancient history of the universe and its recent expansion history fairly well, but there's a troublesome gap in the middle 11 billion years," says cosmologist Kyle Dawson of the University of Utah, who leads the team announcing today's results. "For five years, we have worked to fill in that gap, and we are using that information to provide some of the most substantial advances in cosmology in the last decade.”

The new results come from the extended Baryon Oscillation Spectroscopic Survey (eBOSS), an international collaboration of more than 100 astrophysicists that is one of the SDSS's component surveys. At the heart of the new results are detailed measurements of more than 2 million galaxies and quasars covering 11 billion years of cosmic time.

Ohio University's Dr. Hee-Jong Seo is a collaborator on the project and served as the project's tiling coordinator, architect of the map-building process, since July 2013. She was in charge of tiling the spectroscopic plates for the entire eBOSS survey in a way that maximized the efficiency of the observations.

Filling in Between the Big Bang and Cosmic Microwave Background

Scientists know what the universe looked like in its infancy, thanks to the thousands from around the world who have measured the relative amounts of elements created soon after the Big Bang and who have studied the Cosmic Microwave Background. They also know its expansion history over the last few billion years from galaxy maps and distance measurements, including those from previous phases of the SDSS.

"Taken together, detailed analyses of the eBOSS map and the earlier SDSS experiments have now provided the most accurate expansion history measurements over the widest-ever range of cosmic time," says Will Percival of the University of Waterloo, eBOSS's survey scientist. "These studies allow us to connect all these measurements into a complete story of the expansion of the universe."

The final map is shown in the accompanying image. A close look at the map reveals the filaments and voids that define the structure of the universe, starting from the time when the universe was only about 300,000 years old. From this map, researchers measure patterns in distribution of galaxies, which give several key parameters of the universe to better than 1 percent accuracy. The signals of these patterns are shown in the insets in the accompanying image.

This map represents the combined effort of more than 20 years of mapping the universe using the Sloan Foundation telescope, with operations support over the last five years from the U.S. Department of Energy, the Sloan Foundation, and partnering institutions. The efforts of Dr. Seo were supported by a research award from the U.S. Department of Energy Office of Science and recognized further by a prestigious DOE Early Career Award.

The cosmic history revealed in this map shows that about 6 billion years ago, the expansion of the universe began to accelerate, and it has continued to get faster and faster ever since. This accelerated expansion seems to be due to a mysterious invisible component of the universe called "dark energy," consistent with Einstein's General Theory of Relativity but extremely difficult to reconcile with the current understanding of physics, the researchers note.

Combining observations from eBOSS with studies of the universe in its infancy reveals cracks in this picture of the universe. In particular, the eBOSS team's measurement of the current rate of expansion of the universe (the "Hubble Constant") is about 10 percent lower than the value found from distances to nearby galaxies. The high precision of the eBOSS data means that it is highly unlikely that this mismatch is due to chance, and the rich variety of eBOSS data gives scientists multiple independent ways to draw the same conclusion, the researchers say.

"Only with maps like ours can you actually say for sure that there is a mismatch in the Hubble Constant," says Eva Maria Mueller of the University of Oxford, who led the analysis to interpret the results from the full SDSS sample. "These newest maps from eBOSS show it more clearly than ever before."

There is no broadly accepted explanation for this discrepancy in measured expansion rates, but one exciting possibility is that a previously unknown form of matter or energy from the early universe might have left a trace on our history, the researchers posit.

The Geometric Curvature of the Universe

In total, the eBOSS team made the results from more than 20 scientific papers public today. Those papers describe, in more than 500 pages, the team's analyses of the latest eBOSS data, marking the completion of the key goals of the survey.

Within the eBOSS team, individual groups at universities around the world focused on different aspects of the analysis. To create the part of the map dating back 6 million years, the team used large, red galaxies. Farther out, they used younger, blue galaxies. Finally, to map the universe 11 billion years in the past and more, they used quasars, which are bright galaxies lit up by material falling onto a central supermassive black hole. Each of these samples required careful analysis in order to remove contaminants and reveal the patterns of the universe.

"By combing SDSS data with additional data from the Cosmic Microwave Background, supernovae, and other programs, we can simultaneously measure many fundamental properties of the universe," says Mueller. "The SDSS data cover such a large swath of cosmic time that they provide the biggest advances of any probe to measure the geometrical curvature of the universe, finding it to be flat. They also allow measurements of the local expansion rate to better than 1 percent."

eBOSS, and SDSS more generally, leaves the puzzle of dark energy, and the mismatch of local and early universe expansion rate, as a legacy to future projects. In the next decade, future surveys may resolve the conundrum, or perhaps, will reveal more surprises, the researchers note.

Meanwhile, the SDSS is nowhere near done with its mission to map the universe.

"The Sloan Foundation Telescope and its near twin at Las Campanas Observatory will continue to make astronomical discoveries, concentrating on mapping our galaxy and nearby universe, and the flickers and flares of distant black holes," said Karen Masters, spokesperson for the current phase of SDSS. The SDSS-V team is busy building the hardware to start this new phase and is looking forward to the new discoveries of the next 20 years.

For OHIO's Seo, the next step will be through the Dark Energy Spectroscopic Instrument (DESI) survey, which looks to further understand the puzzle of dark energy and the mismatch of the rate of expansion at greater precision. She is a key project co-convener for the first measurement of the cosmological parameters of the survey. 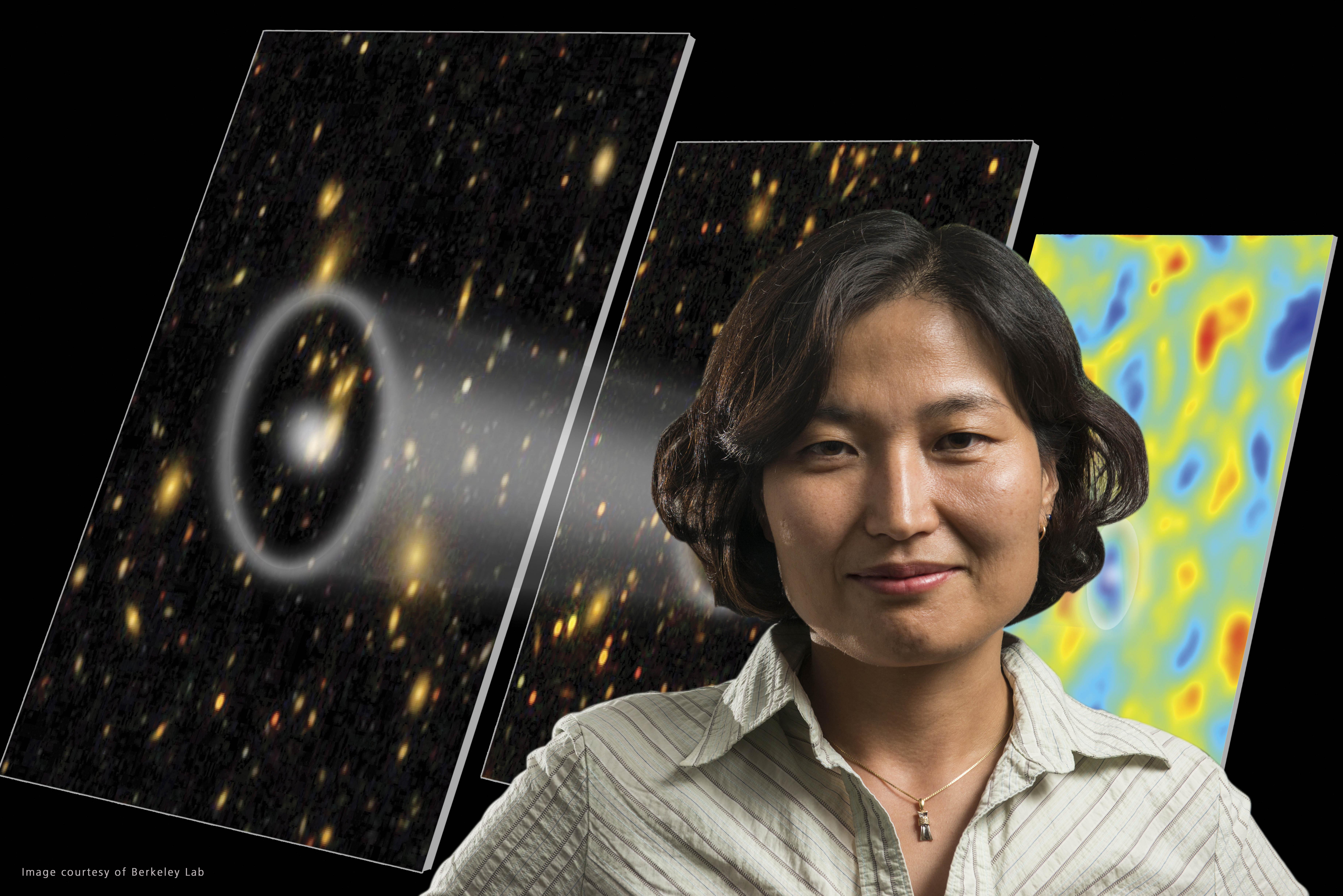 "The observed galaxy distribution often becomes contaminated with systematics in the process of observation, and these are mitigated before deriving the reported cosmological parameters," Seo said. "Mehdi Rezaie (OHIO graduate student) has worked on improving such mitigation methods for the eBOSS quasars by utilizing a deep-learning technique in an interdisciplinary collaboration with many astronomers in eBOSS as well as Razvan Bunescu, professor in the School of Electrical Engineering and Computer Science at OHIO.

“This improvement is expected to be most important for solving another mystery piece of our Universe, the inflation, which is an accelerated expansion that happened much earlier, 10^{-36} seconds after the Big Bang. Inflation increased the size of the universe by 10^26 times in a blink of an eye (to be more accurate, in one decillionth of a blink of an eye),”Seo said. “Mehdi's result will be used for this measurement of the inflationary physics, which is led by Eva Mueller of the University of Oxford and will be published as subsequent eBOSS papers in a couple of months."

Seo noted that Grant Merz, an Honors Tutorial College undergraduate at OHIO and now entering OHIO's master’s program in physics, "has been testing the impact of such improved mitigations methods on dark energy cosmological parameters to confirm the robustness of the eBOSS measurements."